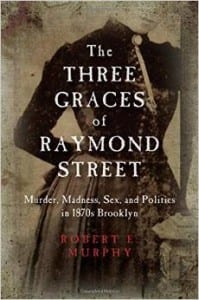 A compelling story about three murders in Brooklyn between 1872 and 1873 and the young women charged with the crimes is told in a new book by Robert E. Murphy, Three Graces Of Raymond Street: Murder, Madness, Sex, and Politics in 1870s Brooklyn (SUNY Press, 2015).

Between January 1872 and September 1873, the city of Brooklyn was gripped by accounts of three murders allegedly committed by young women: a factory girl shot her employer and seducer, an evidently peculiar woman shot a philandering member of a prominent Brooklyn family, and a former nun was arrested on suspicion of having hanged her best friend and onetime convent mate.

Two of the women were detained at the county jail on Raymond Street, while one remained at large, and her pursuit and eventual arrest was complicated by dissension in the police department. Lawyers for all three women prepared insanity defenses, and citizens thronged the courtrooms to witness the suspenseful trials.

An intriguing account of the events surrounding the cases, which became entwined with Brooklyn’s politics and religious differences, The Three Graces of Raymond Street offers insights into the sexual mores of the times and illustrates the development of the modern American city.

Robert E. Murphy is also the author of Brooklyn Union: A Centennial History and After Many a Summer: The Passing of the Giants and Dodgers and a Golden Age in New York Baseball. He lives in Brooklyn.