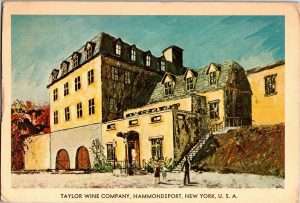 Walter Taylor’s three sons carefully guided the company through Prohibition and beyond, making it the most important winery in the Northeast and profoundly affecting the people and community of Hammondsport, where the company was headquartered.

In 1962, the Taylor family purchased the Pleasant Valley Wine Co. in the Finger Lakes and took the company public. Ranked sixth in domestic wine production and ripe for corporate takeover, the company was sold to Coca-Cola in 1977. Three more changes of corporate ownership followed until, in 1995, this once-dynamic and important wine producer was obliterated, tearing apart the local economy and changing a way of life that had lasted for nearly a century. 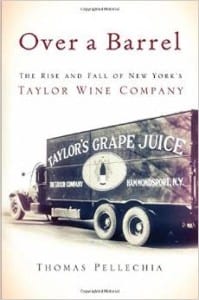 Drawing on archival research as well as interviews with many of the principal players, Thomas Pellechia’s Over a Barrel: The Rise and Fall of New York’s Taylor Wine Company (SUNY Press, 2015) traces the economic dynamism of the Finger Lakes wine region, the passion and ingenuity of the Taylor family, and the shortsighted corporate takeover scenario that took down a once-proud American family company.

In addition to providing important lessons for business innovators, Over a Barrel is a cautionary tale for a wine region that is repeating its formative history.

Pellechia is an independent journalist and writer who previously produced wine in the Finger Lakes and operated a wine shop in Manhattan. He is the author of Wine: The 8,000-Year-Old Story of the Wine Trade, The Complete Idiot’s Guide to Starting and Running a Winery and Timeless Bounty: Food and Wine in New York’s Finger Lakes. He lives in Hammondsport, New York.