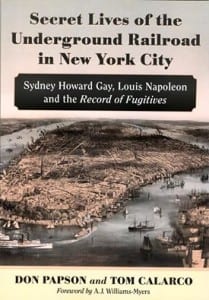 The new book, Secret Lives of the Underground Railroad in New York City (McFarland, 2015), offers first person accounts of the clandestine efforts to help escaping slaves. Drawing on never-before-published Record of Fugitives kept by newspaper editor and abolitionist Sydney Howard Gay, the book provides vivid detail of the lives of Underground Railroad agents, and the harrowing journey that African-Americans undertook to free themselves from slavery.

The co-authors are steeped in this history. Don Papson was founding president of the North Star Underground Railroad Museum in Ausable Chasm, responsible for much of the research that brought the Champlain Line of the freedom trail to light. Tom Calarco is author of three other books on the topic, including The Underground Railroad in the Adirondack Region.

Links between their New York City story and the Adirondacks, and other parts of the state are everywhere, with tales of journeys up the Hudson River to Albany and Troy, out west to Niagara, and more. The Record of Fugitives, discovered at the Columbia University library and transcribed by volunteers, covers the years 1855 and 1856.

Here’s but one example, with the amount spent to help the couple, noted at the end:

“John Williams & Mary, his wife, from Haven Manor, 13 miles from Elkton, Md. master’s name John Peach.  Ran away last Fall, but were caught between Newcastle & Wilmington, taken back & whipped.  Peach said if they ran away again, “he would have ’em if he had to go to hell for ’em.”  He will only, however, have to go (to) Canada.  It is not to be-sure so far, but the difficulties would hardly be greater, as in the other place, a slave catcher would be sure of aid & sympathy…..Sent on to Syracuse.  $8.50″

The book also uncovers the significant role of a black man, Louis Napoleon, in the Underground Railroad organizations in New York. He escorted escapees through the city, helped to hide them and arranged transportation to the North.  And, even though he was illiterate and signed documents with an X, he also filed suits in local courts to free fugitives who were being held in jail.