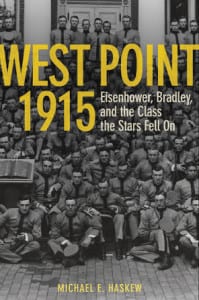 The cadets of the United States Military Academy, West Point, are intimately twined with the country’s history. The graduating class of 1915, the class the stars fell on, was particularly noteworthy. Of the 164 graduates that year, 59 (36%) attained the rank of general, the most of any class in. Michael Haskew’s West Point 1915: Eisenhower, Bradley, and the Class the Stars Fell On (Zenith Press, 2014) explores the achievements of this remarkable group.

Although Dwight Eisenhower and Omar Bradley, both five-star generals, are the most recognizable, other class members contributed significantly to the Allied victory in World War I, World War II and played key roles either in the post-war U.S. military establishment or in business and industry after World War II, especially in the Korean War and the formation of NATO.

For more than half a century, these men exerted tremendous influence on the shaping of modern America, which remains substantial to this day. Individually, the stories of these military and political leaders are noteworthy. Collectively, they are astonishing.

Michael E. Haskew has been writing and researching military history subjects for over twenty years. He is the editor of WWII History Magazine and The World War II Desk Reference with the Eisenhower Center for American Studies (Harper Collins). He is the author of over ten titles focused on a wide range of military history. He holds a bachelor’s degree in history from the University of Tennessee and resides in Chattanooga, Tennessee.