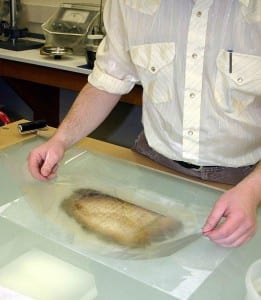 The documents are expected to be conserved and digitized are badly fire damaged and contain information about life in the Hudson Valley in the 1700s, primarily in Dutchess, Ulster, and Orange counties. They have been unavailable to the public since 1911; no timetable for online public access has been announced.

The 1911 Capitol Fire destroyed most of New York’s Revolutionary War era records and almost one quarter of English colonial documents. The records that survived are significantly fire damaged. Although the written texts of the documents are somewhat legible, the edges are charred and so vulnerable to damage that researchers have not been allowed to use the originals since the fire.

From the State Archives’ collections, a variety of unique documents from the British Colonial era are expected to be conserved and digitized. The documents shed a new light on life in the Hudson Valley in the years leading up to the Revolutionary War. Topics include:

Counterfeiting in the Hudson Valley, 1745 – Counterfeiting of paper money and other documents of monetary value was prevalent in the eighteenth century. During the 1740s, a strip of land along the Connecticut border in Dutchess County was a refuge for New England counterfeiters because of its remote location and disputed legal status. Documents contain information about Dutchess County counterfeiters and provide striking evidence of an underground economy and difficulties of law enforcement in the 18th century. The documents remain largely intact but in extremely fragile condition. 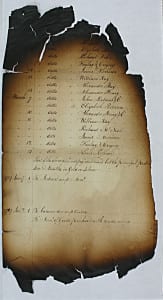 First licensed ferry between Poughkeepsie and Kingston, 1752 – Although the Hudson River was the great interior highway of New York Colony, the river was a barrier to commerce between the two shores. Ferries appeared in the Dutch period and Jacob Kip started running a ferry between Poughkeepsie and Kingston around 1700. In 1749, Jacob’s son Abraham petitioned the Governor and Council for a ferry patent, and in 1752 the patent was issued. The petitions, related documents, and the patent tell a story of investment and enterprise in improved transportation in the mid-Hudson Valley. Some documents are intact while others require conservation before they can be used.

Photos of burned documents and conservation techniques can be viewed here.

The NYS Archives is a program of the NYS Education Department’s Office of Cultural Education. For more information about the State Archives and its collections, programs and services, visit http://www.archives.nysed.gov/.

Photos: Above, a paper conservator adhering translucent Japanese tengujo tissue paper to a burned document to help preserve the paper support and the text that remains; below, a digital photograph of one of the documents inaccessible to the public since 1911.