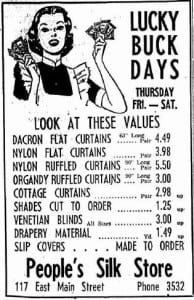 Samuel L. Kupferberg’s ancestors were in the fabric trade so it was only logical that he pursued that line of work. Born in Romania in 1893, Sam had 17 siblings. Two of his older brothers had started fabric businesses in New York City. Getting to America from Codaesti, Romania was an issue for Sam. During World War I Romanian Jews were confined to their villages. After the war Sam left the old country in 1920 for New York City where he worked with his oldest brother, Jacob.

In 1926 Amsterdam’s People’s Silk Store, which sold fabrics and draperies, was for sale. Sam took the train upstate, bought the business and kept the name.

Why People’s? It could have been someone’s name, simple advertising, or part of the worker owned cooperative movement. Amsterdam once had another downtown business named People’s Credit Clothing Store.

Sam met Rae Abramson from Schenectady in 1927 and they married that year. The Abramsons owned a bakery on Broadway in Schenectady.

The Kupferbergs lived at first in a flat on Amsterdam’s Academy Street. Rae was bookkeeper and a sales person at the store.

When Sam bought People’s Silk Store, it was located at 23 East Main Street. In 1928 the business was at 139 East Main. By 1936 the store had moved to 117 East Main. The Kupferbergs owned that building and the structure next door, which housed the Mohican Market.

In 1933 Sam and Rae adopted Harvey, their first child. Two daughters were born after World War II, Judith and Audrey.

Although the Kupferbergs sold silk, their daughter Audrey said silk was not her parents’ prime product. The store was known for woolens, cottons, satins, taffetas and synthetic fabrics. The store sold draperies, shades, venetian blinds, bedspreads, table cloths and dress and drapery materials by the yard.

At age 63 Sam Kupferberg died from a heart attack in 1957. He was president for a time of Congregation Sons of Israel and served on its board of directors. He belonged to the Elks and the Masons.

Audrey was eight years old when her father died, “He was a wonderful man, and throughout my youth people would come up to me in the street and hug me because they remembered how good a man my father was—and I look just like him!” 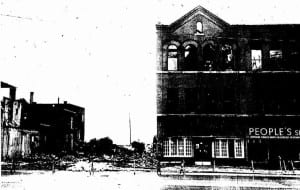 As mill workers lost their jobs and Amsterdam’s downtown declined in the 1960s, the government began purchasing properties, including the Kupferberg buildings, for urban renewal.

A man named Richard Glamm was seriously injured after he stopped his car to help firemen battle the blaze. Glamm fell from the third floor roof.

In an ad in the Amsterdam Recorder, Rae Kupferberg thanked the police and fire departments, the GAVAC ambulance corps and the Salvation Army. She often told her friends, “People’s Silk Store went out in a blaze of glory.” The buildings involved were demolished starting later that year.

Rae Kupferberg died in 2000; she was 91. Audrey Kupferberg, now a film historian and archivist, and her husband, writer and film critic Rob Edelman, moved to Amsterdam in 1990. They teach film courses at the University at Albany. They live in the house on Division Street that Sam and Rae built in 1937.

A version of this post was first published at the Daily Gazette.