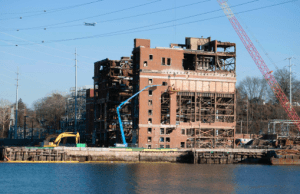 In 2014, the intensive adaptive reuse project of the Bulova Watchcase Factory in Sag Harbor was completed, transforming a long-neglected nineteenth-century factory into luxury condominiums.  While the east end of Long Island celebrated saving an iconic industrial complex, the Glenwood Landing Power Plant in Nassau County, built in 1923 by a consolidated Long Island Lighting Company, has been demolished.

For the SPLIA’s 2015 List of Endangered Historic Places, two in-house nominations were chosen as representatives of Long Island’s early industrial heritage threatened by neglect and a lack of use.

A rare surviving early-18th century industrial building with characteristic Dutch framing methods, the Roslyn Grist Mill has been vacant and threatened by demolition by neglect since the 1970s.

Designated a Town of Southampton Historic Landmark in 1985, the building has been vacant since 2008. Once a center of industry in the area, the mill served as a location for carriage, wheel, and coffin-making throughout its history.

More about the SPLIA’s Endangered Historic Places program can be found online.

Applications are now available to eligible municipalities and not-for-profits for Preserve New York and Technical Assistance grants from the Preservation League of New York State and the New York State Council on the Arts (NYSCA). More information about Preservation Grants can be found here.