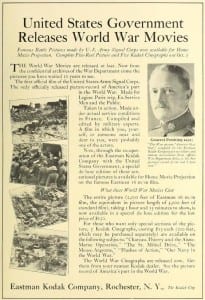 Originally distributed in 1919, these five short documentaries (total run time approximately 60 minutes) include scenes from battles in “No Man’s Land”, the U.S.S. Leviathan, the sinking of battleships by U-Boats, as well as the capture of German prisoners and Armistice Day celebrations.
OBHS member Sheila Lieber said, “It was a real pleasure to have the opportunity to view such rare archival footage.” The movie will be accompanied by an ‘epic soundtrack’ with comments and historical context provided by Executive Director Philip Blocklyn.

The screening will begin at 7 pm on Wednesday, January 28th at the Koenig Research Center (behind the historic Earle-Wightman house), 20 Summit Street, Oyster Bay, New York.

Popcorn and soft drinks served. $10 per ticket for members and $15 for non-members.
For more information call 516-922-5032 or email obhslibrary@optonline.net