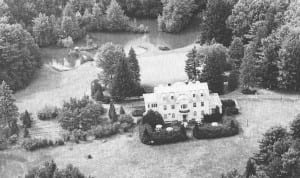 A man who started in the knitting business in Amsterdam built the lavish structure now known as Villa Balsamo restaurant off Route 50 between Ballston Spa and Saratoga Springs.

According to historian David Fiske, Floyd J. Shutts was stymied by Amsterdam officials in 1918 when he tried to add on to his factory on Wall Street. Turned down in Amsterdam, Shutts bought property on Saratoga Avenue in Ballston Spa and opened the Ballston Knitting Company in 1920.

One Amsterdam official, barber and Alderman John Hungerschafer, was disappointed with the way local government treated Shutts, saying the city needed such “young men with push and progress, not old men who are going backward.” Others argued that Shutts had gone to Ballston Spa for his own reasons.

As city officials, including Mayor Seely Conover argued, the Amsterdam Recorder reported, “Intimations that someone was prevaricating were passed several times.”

In 1922 Shutts’s former Amsterdam plant was in the news when what the newspaper called “a large band of gypsies” rented the structure. Commissioner of Public Safety John J. Riley ordered the gypsies to leave the city after he reportedly found the former Shutts building and another structure “in filthy conditions.”

Floyd J. Schutts was born in 1887 in Martindale, Columbia County and attended Albany Business College. He became a manager with First National Bank in Philmont. He left that job in 1910 to serve as head bookkeeper for John K. Stewart & Sons, underwear manufacturers in Amsterdam.

In 1911 Shutts went into the knitting business as a wholesaler and put in some knitting machines in his Amsterdam plant. Business grew during World War I leading to his unsuccessful request for an addition to his factory in 1918.

A few years after Shutts moved to Ballston Spa, he convinced James McNamee, who was operating a sweater coat factory in Amsterdam, to start a joint operation in the Saratoga County village.

As he became prosperous, Shutts bought 100 acres off the highway between Ballston Spa and Saratoga Springs. He built a three-story, 15-room mansion, today’s Villa Balsamo, at an estimated cost of $500,000.

Although described as “stout,” Shutts was an outdoorsman. In 1930 he went by train and seaplane to hunt big game in Canada.

His life was cut short in 1934 at age 47 by complications from an attack of gastric ulcers. His large funeral cortege passed through Ballston Spa with his factory workers lined up for blocks on both sides of the street. He was buried at the village cemetery.

His widow Robbie, originally from Saratoga Springs, and daughters Almeda and Florence stayed at the family home for a time. Florence’s wedding apparently took place at the lavish mansion in 1939.

Restaurateur Gerard King, operator of Newman’s Lake House, bought the estate after that and the Daily Gazette reported that Bing Crosby had been among the celebrities who stayed there.

King, who faced gambling charges in 1951, sold the property that year. There were several other owners, notably Schenectady businessman Chester Hotaling who bought the parcel in the 1960s and used it as a restaurant called the Chester House.

Joseph Balsamo, part owner of a restaurant near Aqueduct racetrack downstate, bought the Chester House in 1976. He named the property Villa Balsamo, an upscale Italian restaurant, usually in operation during the summer racing season at Saratoga. According to realtor Joan Purtell, the property, no longer open as a restaurant, is currently for sale at an asking price of five million dollars.