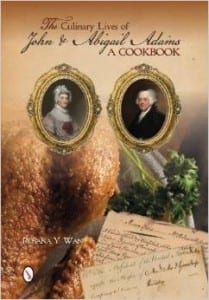 Throughout their 54-year marriage, John and Abigail Adams enjoyed hearty, diverse cuisine in their native Massachusetts, as well as in New York, Philadelphia, and Europe. Raised with traditional New England palates, they feasted on cod, roast turkey, mince pie, and plum pudding.

These recipes, as well as dishes from published cookbooks settlers brought from the Old World, such as roast duck, Strawberry Fool, and Whipt Syllabub, are included in this new historical cookbook by Rosana Y. Wan, The Culinary Lives of John and Abigail Adams: A Cookbook (Schiffer, 2014).

The book introduces a culinary journey of John, who wrote his wife about dinners with upper-class families in Philadelphia while serving in the Second Continental Congress, and Abigail, the loyal and generous hostess who crossed the Atlantic to join the first American Ambassador to Great Britain. This extraordinary couple humbly experienced an international style of cookery that inspired modern American culinary culture.

Born in Hong Kong and raised in various places in the United States, Rosana Yin-Ting Wan attended University of Houston-Downtown in Houston and later graduated with honors from Suffolk University, Boston, with a degree in history. Since relocating to Boston, where she currently lives, she has pursued her passion for studies in the history of the American Revolution. She is an avid traveler, an independent scholar, a Park Ranger at the Adams National Historical Park, and a sergeant in the Army National Guard. She is a former re-enactor of the Charlestown Militia Company.