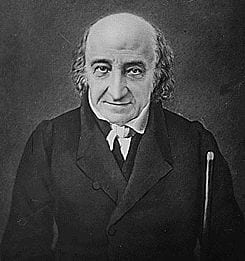 January 29th is the birthday of Albert Gallatin. The Lower Manhattan Historical Society will hold a brief ceremony at 4:30 pm in which students from New York University will lay a wreath on Gallatin’s grave in Trinity Church Cemetery. The ceremony will be followed by a lecture on Gallatin at 5:30 at the Museum of American Finance at 48 Wall Street in Manhattan.

Although not as well known as some of the more famous residents of Trinity’s cemetery, Albert Gallatin, was an important figure who fought for regular Americans and a more democratic society.

Gallatin was from a Swiss aristocratic family. In 1780, at the age of 24 and to the dismay of his family, he came to the United States to strike out on his own. Making his way to the wilds of Western Pennsylvania, he speculated in land and became active in politics. His heavy French accent and aristocratic training did not impede his progress as a strong anti-Federalist Democratic-Republican on the Pennsylvania frontier.

In 1793 he was elected to the U.S senate from Pennsylvania, but the Federalists had him removed from office because of his foreign birth. As a member of the House of Representatives in 1794, Gallatin vehemently opposed Alexander Hamilton’s attempt to supress the Whiskey Rebellion. By 1800 he had succeeded James Madison as the Democratic-Republican leader in the House of Representatives.

The election of Thomas Jefferson as President over John Adams in 1800, brought  a sea change in American politics. The aristocratic Federalists were replaced by more radical Democratic-Republicans who voiced support of the common man. Gallatin was at the center of this movement, and during a dispute between Aaron Burr and Jefferson in the House of Representatives, he proved instrumental in winning the day in favor of Jefferson. As a result, he was appointed the nation’s fourth Secretary of Treasury. Gallatin would serve in that position for almost 14 years, longer than any other Secretary of the Treasury.

Many Federalists feared the Jefferson Administration would undo the Hamiltonian economic policies that had prevailed. Gallatin however, selectively retained some of Hamilton’s policies while pushing to cut government debt and orient policies toward the small business men and individuals that were the his party’s base. As a result, entrepreneurial activity such as Robert Fulton’s steamboats, flourished. Later during the War of 1812, President Madison sent Gallatin to Europe where he negotiated the Treaty of Ghent that ended that war.

After spending some time in Europe, he returned to the United States and continued to advocate for the common man and working people, even though many considered him a Swiss aristocrat. Among his interests was education and in 1831 he founded what today is New York University as an alternative to elite colleges like Columbia so that working people could acquire a quality education.

The recently formed Lower Manhattan Historical Society and the Museum of American Finance are for the first time seeking to give him some measure of the recognition to which he is due on his 254th birthday.