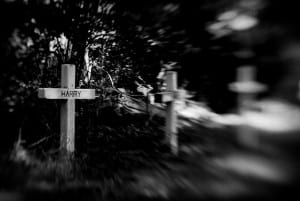 The Oyster Bay Historical Society’s 2015 season opens with the exhibition The Other Side – Charles, Caesar, Harry, Sam, Pompey, Lon and Isaac, a photographic collection by New York artist Xiomáro (SEE-oh-MAH-ro). The collection of twenty-nine photographs will be on view from January 11 to March 29, 2015.

The Other Side looks at the William Floyd Estate in Mastic Beach, a National Park unit of Fire Island National Seashore. Long Island plantation and slave owner William Floyd (1734-1821) represented New York in the First Continental Congress in Philadelphia, where he set his signature to the Declaration of Independence in July 1776. Photographs on exhibit provide landscape vistas of the estate grounds as well as intimate interior views of rooms not included in regular tours of the house.

At the heart of the collection are photographs of undated wooden crosses bearing generic slave names, set apart on the other side of a fence from the elaborate individualized stones of the Floyd family cemetery. The photographs serve as spiritual memorials to the laborers – both enslaved persons and paid house servants of color – who worked on the estate. These plain wooden crosses, put in place sometime in the 1870s, represent in part the Floyd family’s evolution from slave ownership to active military service in the Union army during the American Civil War.

Xiomáro is a nationally exhibited artist from Roslyn Heights, NY whose work has been covered by The New York Times, News 12 Long Island, and The Huffington Post. On January 5th, The Other Side was featured in the prestigious Aspect Ratio, a London-based photography magazine. His other National Park Service commissions include President Theodore Roosevelt’s Sagamore Hill mansion, which debuted at the Oyster Bay Historical Society in 2013 before traveling to Harvard University. At present, Xiomáro is photographing the home of poet and abolitionist Henry Wadsworth Longfellow (a friend of Roslyn’s William Cullen Bryant) and will be living in a Florida swamp for a month documenting the fragile ecosystem that feeds into the Everglades.