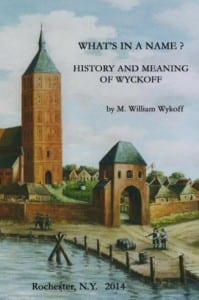 In What’s In A Name? History And Meaning Of Wyckoff (2014), M. William Wykoff offers evidence that the origin of the surname Wyckoff is Frisian and refers to a household or settlement on a bay, despite widespread belief of American descendants of Pieter Claessen Wyckoff that the name is Dutch.

Frisian was only one of the many languages spoken by early settlers of New Netherland. There are many spelling variants of the surname in the Northern Germanic linguistic area of Europe, Wykoff argues, but it now occurs principally in the Lower Saxony area of Germany which includes East Frisia from where Pieter Claessen Wyckoff emigrated.

Countering what the author calls “the proliferation of costly false and inaccurate information being disseminated on popular interactive genealogy websites” Wykoff suggests measures that could be taken by professional genealogical societies and family associations to correct the record.

William Wykoff attended Penn State University, studied at the Free University of Berlin, and was awarded a fellowship to study anthropological linguistics at Cornell University. He taught a variety of subjects at Oberlin College in the 1970s and returned to Cornell to become a research associate in the Department of Ecology and Evolutionary Biology until retirement in the 1990s. His research interests include Iroquoian prehistory, ethnobotany, paleoclimatology, biogeography, primatology, and language evolution. He conducted field research at Six Nations, Ontario and in Yunnan, China.