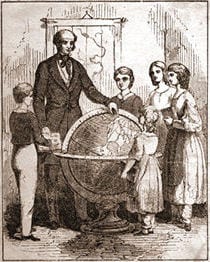 There is lots of discussion these days about the “power of place” – the importance of geography and the influence of locales and surroundings. The concept dovetails naturally with local history, which explores the historical development of communities.

New York is in an excellent position to explore the connection between the power of place and local history. Our state has hundreds of local historical societies and other public history programs and is the only state in the nation with officially designated local historians.

*Place and the history of environmental change. Naomi Klein, in her book This Changes Everything: Capitalism vs. the Climate (2014), contends that the impact of climate change over time is most vividly visible and measurable locality by locality. She explains that “…this is a crisis that is, by its nature, slow moving and intensely place based. In its early stages, and in between the wrenching disasters, climate [change] is about an early blooming of a particular flower, an unusually thin layer of ice on a lake, the late arrival of a migratory bird – noticing these small changes requires the kind of communion that comes from knowing a place deeply, not as scenery but also as substance, and when knowledge is passed on with a sense of sacred trust from one generation to the next.” Understanding the impact of climate change, and what needs to be done about it, requires an understanding of how one generation’s actions impact future generations. “… climate change is also about the inescapable impact of the actions of past generations not just on the present, but on generations in the future. These time frames are a language that has become foreign to a great many of us. Indeed, Western culture has worked very hard to erase Indigenous cosmologies that call on the past and the future to interrogate present-day actions, with long-dead ancestors always present, alongside the generations yet to come.”

*“Place esteem.” A second perspective comes from the current issue of Museum, the publication of the American Alliance of Museums, in “A Voice for Museums,” an interview with Congressman Paul Tonko who represents New York’s 20th Congressional District, from Albany to Amsterdam. Tonko is one of the foremost advocates for museums in Washington and continually pushes for more funding for the museum program of the Institute of Museum and Library Services. Museums are essential for education, culture, and vibrant communities, he insists. “In the district that I represent, you’ve got these cornerstones of history and heritage that speak to a sense of ‘place esteem’ that is driven by museum services,” he says.”Awareness, excitement, and enthusiasm are important dynamics for the community. Place esteem, like self esteem, is very important. It’s critical to nurturing the spirit and to economic recovery… Museums allow us to understand the sense of place and its significance – sharing information on the Battle of Saratoga, for instance, or on construction of the Erie Canal.”

*Local history in social studies. The new state social studies framework doesn’t devote much space to New York state history or local history. But there is a placeholder of sorts, a statement that has potential for local initiatives, e.g., by local historians and historical programs, to infuse local history examples into education. It appears on page 86 of the New York State K-12 Social Studies Framework at the beginning of the section on “Grades 7 and 8: History of the United States and New York State:”  – “Teachers are encouraged to incorporate local features of state history in the course, such as the Dutch in the Hudson Valley, the Germans in the Schoharie Valley, the French in the Champlain Valley, Fort Niagara, the Brooklyn Naval [sic] Yard, the Seneca Falls Convention, Underground Railroad locations, war memorials, and other features in their community.”

*Another opportunity for local heritage tourism and historic preservation. Governor Cuomo has proposed a new $1.5 billion competitive grant initiative as part of his “2015 Opportunity Agenda: Restoring Economic Opportunity.” Seven regions are eligible to compete for one of three $500 million upstate revitalization funds: Mid-Hudson, Capital Region, Mohawk Valley, Central New York, North Country, Southern Tier and Finger Lakes. Legislative approval is required, and the parameters may change along the way. But the announcement identified “growing tourism” and “tourism investments” among the eligible areas, an opportunity for imaginative proposals targeting heritage tourism in particular localities or regions. “Improving quality of life” is another priority, presenting lots of possibilities for imaginative historic preservation initiatives. Historic preservation has measurable economic benefits and a proven track record in creating strong communities. “….historic preservation offers cities a major tool in working toward or maintaining livability,” says the book Historic Preservation and the Livable City. “It can contribute to sustainability. It makes people want to live in cities where it is practiced.”

The new regional grant initiative will be guided by a five-person “Strategic Plan Review Committee” which includes Bruce Katz of the Brookings Institution. A book he co-authored last year, The Metropolitan Revolution: How Cities and Metros Are Fixing Our Broken Politics and Fragile Economy, describes the creative, innovative ideas that are emerging from urban areas these days, including Buffalo and New York City.

The new grant program is another opportunity to capitalize on Andrew Cuomo administration’s interest in heritage tourism, particularly the “Path Through History,” and substantial funding from these regional development grants, by developing imaginative new proposals in heritage tourism, historic preservation, and other initiatives to support local history and heighten the power of place.