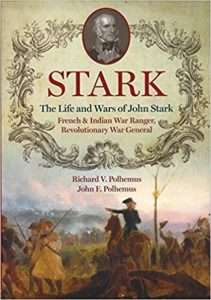 Stark served as a captain of rangers with Robert Rogers in the French and Indian War, and as a colonel and general in the Revolution at Bunker Hill, Trenton, Princeton, Westchester, Springfield, Saratoga, Ticonderoga and West Point.

At Bennington John Stark commanded a force of militia and Green Mountain Boys, everyday men from Vermont and New Hampshire facing professional European soldiers. In a daring and complicated attack, Stark routed an entrenched enemy and almost entirely destroyed it. It was the beginning of the end of the British invasion from Canada until then a juggernaut that could not be stopped.

Stark was the quintessential citizen soldier proud, resourceful, independent. He was unschooled and rough around the edges, a New Hampshire frontiersman. Captured by Indigenous warriors  in 1752, he earned their respect by fighting his way out of their gauntlet.

Congress and commanding officers didn’t always like him, but they relied on him. Stark enlisted for the French and Indian War along with a friend, Robert Rogers. When Rogers was ordered to form a corps of rangers, one of the first he chose was John Stark, who rose to captain of rangers and fought in many of the legendary battles along Lake George and Lake Champlain, including the Battle of Ticonderoga and the First Battle on Snowshoes.

Stark’s ranger experience taught him tactics he would use effectively in the Revolution as he rose through the ranks to brigadier general, fighting at Bunker Hill, Trenton, Princeton, Springfield, Bennington, and Saratoga (at Stark’s Knob). He crossed the Delaware River with George Washington, covered the retreat of the army from Canada, defended Fort Ticonderoga, and sat on the Board of General Officers that convicted Major John André, Benedict Arnold‘s British contact.

At war’s end, John Stark quietly returned to his farm and lumber mill. He departed the spotlight and remains largely unheralded to this day except in New Hampshire, where he is best known for those words he penned in a letter to the Bennington Committee on July 31, 1809, in response to an invitation to celebrate the anniversary of the Battle of Bennington. He regretted that he could not attend, but he offered them this toast: “Live free or die – death is not the worst of evils”.