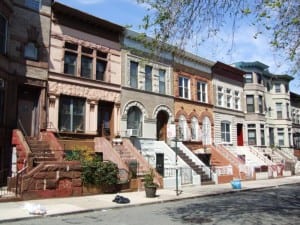 The Historic Districts Council, New York’s city-wide advocate for historic buildings and neighborhoods, is pleased to announce its Six to Celebrate, an annual listing of historic New York City neighborhoods and institutions that merit preservation attention. They will be priorities for HDC’s advocacy and consultation over a yearlong period. This is New York’s only citywide list of preservation priorities coming directly from the neighborhoods.

The six priority areas were chosen from applications submitted by neighborhood groups around the city on the basis of the architectural and historic merit of the area, the level of threat to the neighborhood, strength and willingness of the local advocates, and where HDC’s citywide preservation perspective and assistance could be the most meaningful.  Throughout 2015, HDC will work with these neighborhood partners to set and reach preservation goals through strategic planning, advocacy, outreach, programs and building public awareness.

“Every year, HDC takes this opportunity to highlight community-based preservation campaigns and bring them to a wider audience. Since the program’s launch in 2011, we’ve had a good deal of success – over $40,000 directly raised for neighborhood efforts,  a number of neighborhoods placed on the National Register of Historic Places or designated landmarks,” said Simeon Bankoff, HDC’s Executive Director. “This year, we are especially excited to be focusing citywide on the properties which the Landmarks Preservation Commission has under consideration but still need action. As the Landmarks Law turns 50 this year, we think it’s a perfect time to review the commission’s unfinished work. These properties are in every borough and give us the opportunity to reach out to some of the neighborhood partners who are doing great work but perhaps don’t get the attention they should.”

Founded in 1970 as a coalition of community groups from New York City’s designated historic districts, the Historic Districts Council has grown to become one of the foremost citywide voices for historic preservation.  Serving a network of over 500 neighborhood-based community groups in all five boroughs, HDC strives to protect, preserve and enhance New York City’s historic buildings and neighborhoods through ongoing advocacy, community development and education programs.

This year’s Six to Celebrate include:

Crown Heights North, Brooklyn: The architecture of Crown Heights North encompasses an astonishing variety of brownstones, rowhouses, wood frame structures, free-standing mansions and churches. The neighborhood has two historic districts, but despite the community’s best efforts, efforts to broaden the neighborhood’s protected areas have currently stalled. Over the next year, the Crown Heights North Association (CHNA) will focus on reviving their preservation campaign, as well as ensuring that this beautiful neighborhood will continue to have strong advocates for years to come.

East Harlem, Manhattan: East Harlem has a long history of settlement by immigrant populations. In the 1960’s, after a mass migration of Puerto Ricans to East Harlem, the neighborhood acquired the name “El Barrio.” Building on a long tradition in Latin American art, the painting of murals on East Harlem’s tenement buildings became a popular form of expression and storytelling. East Harlem Preservation, Inc., will showcase its neighborhood’s “buildings as canvases” tradition through public awareness and outreach and work to preserve and restore endangered community art.

Long Island City, Queens: A new preservation group based in Long Island City called +Partners has formed to design, preserve, and catalyze the development of environments and places. Their inaugural project is an ongoing campaign to landmark the Long Island City Clock Tower, a beloved neighborhood anchor. They have recently launched a comprehensive survey of the industrial architecture of Long Island City, with plans to create a publicly-accessible internet resource to guide further preservation efforts.

South Street Seaport, Manhattan: The South Street Seaport is the oldest intact neighborhood in Manhattan. As the nation’s major port for over 100 years, its history is still anchored by the distinct sense of place created by its historic buildings, harbor views and tall ships. The Seaport faces major development pressures from the Howard Hughes Corporation, which would irreversibly and insensitively distort this character. HDC has partnered with Save Our Seaport Coalition (SOS) and Friends of the South Street Seaport (FOSS) to protect this unique district, from the 200-year old mercantile buildings to the Belgian block paving and soaring views of the Brooklyn Bridge.

Woodlawn Heights, The Bronx: Woodlawn Heights is a small residential neighborhood bordered by Van Cortlandt Park, Woodlawn Cemetery, the Bronx River and Westchester County. This historically Irish enclave is bisected by a bustling commercial thoroughfare that still exhibits its Irish flavor through long-standing small businesses and architectural flourishes like green trim and shamrock details. Current threats include the demolition and replacement of historic homes with out-of-scale and non-contextual development. Formed in 2014, the Women of Woodlawn count historic preservation as fundamental to their mission of enhancing local quality of life. They look forward to exploring and preserving the area’s rich history through education and outreach, encouraging tourism, and fostering good stewardship.

Landmarks under Consideration, Citywide: In November 2014, the Landmarks Preservation Commission announced a plan to remove 96 previously considered sites and properties from its calendar. Although the agency chose not to take immediate action on the plan, there remain over 150 sites under consideration that are unprotected. Over the coming year, HDC will document, publicize and conduct community outreach for these sites to increase public awareness and gather support to move their designations forward, while simultaneously aiding the LPC in managing its backlog.

A website for the Six to Celebrate program detailing both the new class and previous can be viewed at 6tocelebrate.org.