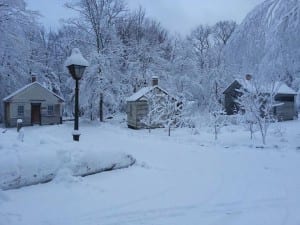 Despite the death of founder Donald G. Carpentier, a full slate of workshops and symposia are scheduled for Eastfield Village during the summer of 2015. Under the aegis of the non-profit Historic Eastfield Foundation, the 39th Annual Series of Early American Trades and Historic Preservation Workshops will offer education and hands-on training at the unique restoration village located in East Nassau, New York.

Beginning in June and running through August, the workshops will appeal to a wide range of students, including homeowners looking to deal with issues concerning historic home maintenance and restoration, as well as tradesmen, craftsmen, and museum personnel seeking to advance their knowledge and skills.

Conducted by experts in their fields, the in-depth, hands-on workshops will include Stone Masonry, Blacksmithing, Timberframing, Tinsmithing I & II, Window Preservation and Restoration, Fireplace Cookery, and Dating and Reproducing Historic Textiles.

In addition to the workshops, the 19th Annual Ceramic Symposium (affectionately dubbed “Dish Camp”) will cover “Three Centuries Of Ceramic Discoveries in America.” It will include a celebration of Don Carpentier’s contributions to the field of Historic Ceramics.

For nearly four decades, the Annual Series of Early American Trades and Historic Preservation Workshops has offered participants a unique immersion experience. Though Carpentier passed away in August 2014 of ALS, his life work—the preservation laboratory that is Eastfield Village—survives. It consists of some twenty buildings and an extraordinary study collection of thousands of architectural elements, tools and artifacts.

Students who take classes at the Village are encouraged to live there during their courses. Meals may be cooked in the late-eighteenth century kitchens; accommodations are rope beds with straw and feather ticks. Eastfield offers an unforgettable opportunity to be with others – students and teachers – of similar interests, and to gain an appreciation for the work and daily life of pre-industrial America.