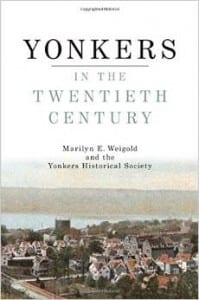 Once known as “the Queen City of the Hudson,” Yonkers, New York, was an industrial powerhouse until the aftermath of World War II, when companies moved away and the city saw an increase in poverty.

The city built public housing to address the needs of its low-income Yonkers in the Twentieth Century residents, resulting in a nearly thirty-year court case that, for the first time in United States history, linked school and housing segregation.

In Yonkers In The Twentieth Century (SUNY Press, 2014), Marilyn E. Weigold and the Yonkers Historical Society explore the gradual decline and glorious rebirth of the city, chronicling both the court case and the city’s economic redevelopment. Filled with photographs, the book presents the unique history of Yonkers by inviting readers to take a step back in time.

Marilyn E. Weigold is Professor of History at Pace University and the author of several books, including The Long Island Sound: A History of Its People, Places, and Environment. The Yonkers Historical Society is dedicated to saving the rich, diverse history of Yonkers. The Society maintains Sherwood House museum, advocates for the preservation of historic landmarks and neighborhoods, and promotes an appreciation of the city’s unique heritage through its many programs, publications, and social media.