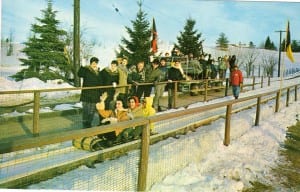 Boosted by the patronage of those seeking a cure from tuberculosis, in the 1880s the Ontario and Western Railway began advertising the area as a winter health resort, publishing its annual “Winter Homes” brochure in addition to the popular “Summer Homes” booklet.

By the 1930s, pioneering resorts such as the Flagler, the Laurels, Gibber’s and Grossinger’s were staying open all year around, offering guests sleigh rides, outdoor ice skating, skiing and tobogganing, as well as such indoor activities as contract bridge, ping pong, and dancing.

By 1940, the Flagler, for example, was heralding in its ads, “In winter as in summer, it’s the Flagler for fun and frolic,” while the Laurels touted itself as “the smartest all-year-round playground in the Catskills for young folks.”

Although Gibber’s was no longer advertising itself as a year-round resort in 1949, Fallsburg’s Hotel Furst and River View Hotel were open all year, with the Hotel Furst advertising a new ice skating rink and “champion toboggan slide.” Beginning in the 1950s, skiing became the principal winter attraction, and would dominate the cold weather sports scene in the southern Catskills throughout the remainder of the 20th century.

“Quite a few years ago, the Concord Hotel at nearby Kiamesha Lake, and Grossingger’s, not far north along Route 17, decided that winter sports could be made into big business,” Michael Strauss wrote in a December, 1958 New York Times article with a Monticello dateline. “Each installed toboggan slides, artificial skating rinks, and modest rope tows to see how these would take with their guests. The projects succeeded immediately.”

Despite the growing popularity of skiing, however, it was tobogganing that topped all other winter sports when Sullivan County resort operators conducted a survey of winter guest preferences in 1966.

“Artificial ice skating rinks and toboggan runs are the most popular attractions at the Sullivan- Ulster County resort hotels, according to a recent survey,” the Times reported. “The survey, conducted by the resort owners, sought to determine the popularity levels of skiing and other winter sports.”

According to the poll, about one-third of the winter visitors listed the artificial skating rinks as their favorite facility, while 50 per cent of those surveyed preferred tobogganing.

“Skiing is the undisputed leader among the younger visitors,” the Times noted. “Among the older guests, there undoubtedly is a feeling that tobogganing and ice skating are safer than skiing.”

The toboggan run may have debuted in Sullivan County at Grossinger’s in 1933, though it was hardly an overnight success. The hotel’s innovative activities director, Abe Sharkey, talked Jennie Grossinger into constructing the run in an attempt to give winter guests something to do. As it turned out, such attractions weren’t really necessary.

“Their winter sports facilities consisted of what may well be the world’s smallest toboggan slide,” Harold Jaediker Taub wrote in his 1952 book Waldorf in the Catskills: The Grossinger Legend. “Still on the grounds, it looks like a rather large slide of the type to be found in a children’s playground.”

Taub noted that the winter sports offerings at the hotel that winter were not popular, but the guests came anyway. “Contrary to all expectations, it turned out that just giving people a place to be lazy and informal, and providing them with good meals were enough to make it pay,” he wrote.

Despite the lukewarm reception, the toboggan run was kept in operation in future years, and eventually expanded, though it never approached the length of the Concord’s famed 700-foot run, on which guests were transported to the top in an electric cable car.

Other popular toboggan runs were located at the Laurels on Sackett Lake and at the Flagler. The run at the Laurels was steep, though not overly long, and emptied out onto Sackett Lake. When the lake was frozen over, guests could end up quite a distance out on the ice. The Flagler’s run was longer, but not as steep, and could dump unwary guests out onto the Neversink River, which only occasionally froze over. This simply added to the excitement of the ride.

By 1966, there were at least 20 year-round hotels in Sullivan and nearby Ulster County. And another expensive trend had begun to develop: The indoor swimming pool.
“Among the area hotels offering skiing, ice skating, and indoor swimming on or close to the main grounds are the Concord, Gibber’s, Grossinger’s, Laurels, the Raleigh, the Pines, Kutsher’s, Homowack, the Granit, the Nevele, the Fallsview, and Young’s Gap,” the Times reported in December of 1966. “Other resorts that aim for the skiing crowd in particular include Avon Lodge, the Columbia Hotel, Davos, and Mount Cathalia.”

Photo: A section of the toboggan run at Grossinger’s circa 1955.