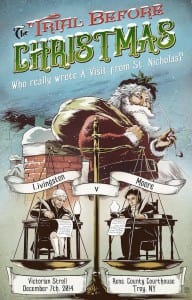 A jury trial in a real courtroom in Troy on Sunday, December 7th at 2 pm aims to solve a centuries-old controversy over who really wrote one of the most beloved holiday poems in the world: “‘Twas the Night Before Christmas.”

Last year “The Trial Before Christmas” was a surprise holiday spectacle that gained national media attention and attracted more than 500 spectators to the Rensselaer County Courthouse – a standing-room-only crowd. But the jury was unable to reach a verdict, so the case will be heard again.

“Account of a Visit from St. Nicholas” also known as “‘Twas the Night Before Christmas,” was published anonymously for the first time in Troy by the Sentinel newspaper on December 23, 1823. And for nearly as long, two New York families have argued over who the poem’s true author was.

Years after its publication, in 1837, a wealthy Manhattan biblical scholar named Clement Clarke Moore claimed authorship and has been officially credited ever since. But descendants of Henry Livingston Jr., a gentleman farmer of the Hudson Valley, claim he was the true, unrecognized author. Backing their assertions is Vassar College professor and literary forensics expert Don Foster, whose 2000 book Author Unknown presented a strong case for Livingston. On the other hand, Dr. Joe Nickell thoroughly refuted those claims in his book Pen, Ink and Evidence, also published in 2000. Both works and other research serve as inspiration for the upcoming courtroom showdown.

Representing Moore is one of Upstate New York’s preeminent litigators, E. Stewart Jones, Jr. On the side of Livingston will be Troy novelist and attorney Jack Casey, author of The Trial of Bat Shea, and his daughter, attorney Molly Casey of Albany law firm Thuillez, Ford, Gold, Butler & Monroe.

A third-generation lawyer, Jones heads the E. Stewart Jones Law Firm established in Troy in 1898 by his grandfather, Abbott Jones.

The trial’s setting will be The John T. Casey Ceremonial Court at the Rensselaer County Courthouse, 80 2nd Street, in Troy, which is named for Jack Casey’s father who served there as State Supreme Court Justice.

Real court officers, a court clerk and a court stenographer will give mock trial goers an authentic experience. But the spirit will be fun and lively, event organizer Duncan Crary said in an event announcement. A saxophone playing Santa Claus, elf and special guest will entertain the audience during a brief jury deliberation.

Last December the Jones and Casey legal teams argued passionately on behalf of their clients, the descendants of Clement C. Moore and Henry Livingston Jr., but a jury of six with one alternate – selected from the audience – was unable to reach a verdict.

This year, the case will be re-tried with the original legal teams reprising their roles during Troy’s 32nd Annual Victorian Stroll, a city-wide holiday festival that attracts more than 20,000 visitors.

Jurors will be selected at random from the audience. Admission is free and open to the public on a first-come, first-seated basis. There will be a live simulcast in the courthouse rotunda to accommodate overflow crowd. A post-trial party will be held on the second floor of the neighboring Troy Public Library, with a $5 suggested donation to benefit that organization.