This is perhaps the greatest Adirondack rescue story ever. With all the inherent dangers of hiking, rock climbing, and navigating treacherous river rapids by canoe or kayak, this incredible incident, ironically, was unrelated to the most popular mountain pursuits. But when accidents occur while enjoying those pastimes, one factor above all can turn any outing into a life-or-death drama: weather.

In late December 1935, a Boston-to-Cleveland flight encountered heavy fog and was grounded at Syracuse. Because of bad weather to the west, the pilot was instructed to return to Boston. He was cleared for takeoff at 7:29 p.m., despite heavy snow that had begun falling.

Improved weather was expected as the plane traveled east, but conditions instead worsened, eventually causing the radio to produce mostly static. They circled the Utica airport for about an hour, but heavy snow prevented landing.

In blizzard-like conditions, the pilot was forced to navigate by compass. The plane veered north of Utica into the southern Adirondacks, fighting a losing battle against extreme conditions. Ice soon clogged the carburetor of the right engine, causing it to fail. The left engine began to fail as well, and they quickly lost altitude. There was no avoiding it: Flight 166 was going down.

Pilot Ernest Dryer, a skilled aviator, was widely known as a bad-weather pilot. His instincts took over, and as the plane brushed the treetops, Dryer killed the electricity and slowed the plane’s speed as much as possible. At the last second, he pulled up, forcing the plane to stall, and minimizing the impact of the crash.

In the dark of night, deep in the wilderness several miles south of Piseco Lake in Hamilton County, the plane belly-flopped near the top of a small mountain. In the final seconds, it dropped almost vertically, not unlike the landing of a helicopter. The wings sheared off in the trees, somewhat cushioning the impact.

Ernie, his brother Dale (co-pilot), plus pilot/passenger Jack H. Brown and passenger Richard W. Hambrook, a federal employee, all climbed from the wreckage, keeping their distance for a few minutes while watching for any sign of fire. 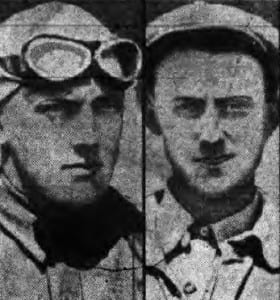 When it was deemed safe, they reentered the cabin and tried the radio, but the master switch had been damaged. Repairs would have to wait until daylight, so they began making plans to spend the night. The weather was terrible, but luckily, the temperature was hovering around the freezing mark. Had it been colder, they could have been in real trouble. Only a couple of light blankets were on board.

The big Curtiss Condor plane had made its inaugural flight just over three weeks earlier. It was considered a modern marvel, with a 15-passenger capacity and a wingspan of 84 feet. Now, however, that span had been drastically reduced, but the plane’s cabin remained largely intact.

Fashioning a lean-to from the separated wing sections, some saplings, and a parachute, the men built a fire in front of the shelter and settled in for a very cold, uncomfortable night. They were hungry as well, but had only two chocolate bars to sustain them.

Conditions were poor, but Brown and Hambrook were better off than the Dryer brothers, who both suffered injuries in the crash. Dale’s face was badly bruised from slamming against the control panel, and swelling suggested that he had a broken jaw. Ernest was worse, having been thrown violently forward on impact, causing internal injuries and intense hip pain.

Both Dryers were tough men and experienced fliers who had survived near-catastrophes in the past. The Adirondacks would soon provide them with the challenge of a lifetime.

In the outside world, concern already extended from Boston to Cleveland (the Dryers’ hometown). Officials were able to track the plane’s progress past Utica and to the Piseco Lake region. Since the flight had departed Syracuse with only enough fuel for a few hours of flying, it was widely believed the plane had crashed.

Fears mounted for the fate of the crew. An identical sister ship had crashed in the Catskills in June 1934 while battling similar conditions of dense fog. All seven aboard were killed when the plane flew into the side of Last Chance Mountain.

On the morning of Saturday, December 29, the Dryer crew went to work on repairing the radio. At Albany airport, several planes were placed at readiness to begin searching, and radio operators worked continuously, trying to make contact with the downed Condor.

Suddenly, shortly after 9 a.m. … elation! An incoming message, repeated three times: “One sixty-six, Albany.” It was the voice of Jack Brown from the missing plane.

“All four safe. We are on a mountain somewhere between Albany and Utica. I don’t know just where, but we are north of our course. Everybody’s all right. Please tell our folks. We crashed up in a group of trees. We have built a fire so you can find us. We are at 2,200 feet altitude.” Static quickly worsened, and radio contact remained intermittent throughout the day.

Next: The urgent search begins.

Photos: The Curtiss Condor lost in the Adirondacks; Dale and Ernest Dryer