One of the teams heading for the woods was from Hoffmeister, a civilian crew consisting of nine men: four Kreuzers—Earl (32), Floyd (36), George (58), and Bert (62); three Partellos—Dan (37); Charles (41), and Lester (53); Henry Hart (42); and Albert Palm (19). Dismayed at the wait-and-see attitude of some officials, they took to the woods, knowing the survivors by now must be in dire straits if they were, in fact, still alive.

Having noticed a plane circling to the south, they deduced that the pilot had spotted the wreckage. The men snowshoed for miles through difficult conditions, guided by the plane above. In the meantime, Ernie Dryer and his crew knew the end was near, but as the plane flew in ever-tightening circles, they could only wonder if a rescue might be imminent. Then … three gunshots! It was music to their ears. In reply, Ernie fired off three rounds from his pistol.

At 10:40 p.m., more than five and a half hours after Dean Smith had located the wreckage, the Hoffmeister crew arrived at the site. Floyd Kreuzer later described the moment: “These lost fliers presented the most pitiful sight I have ever seen. They had managed to construct a shelter of bent saplings and pieces of plane fabric and were huddled about a tiny fire, which was getting very low. Their heads were wrapped in cloths; improvised leggings and boots of the plane upholstery encased their legs and feet.

“When we approached the four stranded fliers, they were shaking and were almost too weak to talk. They told us they had almost given up hope of rescue and did not believe they could have lasted two hours longer. …With temperatures of 20 to 25 degrees below zero, it is a mystery to us to understand how they ever survived …”

“Their faces and hands were chapped from frost. Their lips were cracked open and bleeding, and their faces were smeared from smoke and soot from the fire. I want to tell you, those men had courage. They kept their heads and didn’t get panicky, even when they knew that death was right next to them.”

Despite the long, exhausting trip through deep snows, the rescue crew went right to work. Some cut and gathered wood to build a large fire, while others fed the men and put wool socks on them. Within minutes of their arrival, an army plane dropped supplies by parachute, but the package became tangled in the top of a tall tree.

Using only a hatchet, three of the men hacked away for an hour until the tree fell, leaving the parachute caught in a smaller tree. Charlie Partello climbed it and retrieved the valued booty: chocolate bars, sandwiches, wine, and cigarettes.

The men were made comfortable with plane cushions atop spruce boughs and plenty of heat from the fire, and were put to bed. Floyd Kreuzer and Lester Partello remained at the site, while the others departed for more supplies and rescue materials.

Several hours after daybreak, help arrived on the scene with food and other necessities, while additional supplies were air-dropped, prompting Floyd to note that, “… we now had enough food to start a restaurant.”

Before noon, the parties had started for civilization. After more than sixty hours in the frozen wilds, Ernie was hauled out by toboggan, while the other three men walked as much as they could on the trek of about six miles. 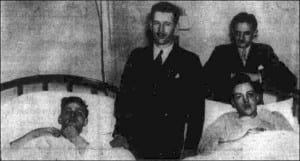 At Hoffmeister they were offered first aid, and then were taken by ambulance to the hospital in Utica. Robert Hambrook, uninjured, flew to Washington that night, while the others remained in the hospital. Brown was in good shape, but suffered from exposure and frostbite.

The Dryer brothers began healing from non-life-threatening injuries. Dale’s face was bruised and his jaw had indeed been broken. Ernie had hip injuries, broken ribs, frostbite on his hands and feet, a fever, and an inflamed throat.

In the hospital, the brothers were joined by an unusual quartet: their wives, Helen and Helen Dryer; their sister, Helen; and their mother … you guessed it … Helen.

Within several days, Ernie became the last survivor to leave the hospital, and just two weeks after the rescue, Dryer was back on the job, flying the US mail to multiple stops between Cleveland and Boston.

The men who first reached the crash site were awarded $25 ($380 in 2014) by the airline company, and were whisked off to Albany to accept personal thanks from Governor Lehman for the happy conclusion of a story that had been followed anxiously by millions. Months later, during a vacation, Ernie Dryer visited Morehouseville and nearby settlements to do the same.

If you’ve ever encased yourself in modern gear and headed to the woods for hours in below-zero weather, you’ll marvel even more at the odds those men overcame. Any of three factors—the storm, the crash, the cold—could have killed them.

And if not for the relentless efforts of ham radio operators and regional air stations, of pilots in the air (especially Dean Smith), and of numerous ground crews who risked their lives to save others, the four almost certainly would have perished.

Capping it all off was the matter-of-fact attitude of the Hoffmeister crew. Knowing that temperatures of 30 below zero meant certain doom for the stranded men, they set out in the dark of night, in bitter cold, and in deep snow, trekking for miles to pull off an amazing, successful rescue, perhaps the greatest such story in Adirondack history.

Next: The rescue becomes part of communications history.