The Board of Directors of the New Netherland Museum has announced that the Half Moon, a replica of the ship sailed by Henry Hudson in 1609, will leave New York State for a new home port in the City of Hoorn, The Netherlands in 2015.

The City Council of Hoorn voted Tuesday to adopt the Half Moon for inclusion in a 17th century historic site under the management of the Westfries Museum. The Half Moon is expected to  remain the property of the New Netherland Museum, but it will lose its long-time captain, William T. “Chip” Reynolds.

“From the moment the keel of the Half Moon was laid, it has been my ambition to see the Half Moon sail in Dutch waters,” Andrew Hendricks, Founder and Chairman of the New Netherland Museum & Half Moon Replica, said in an e-mail announcing the move Tuesday evening. 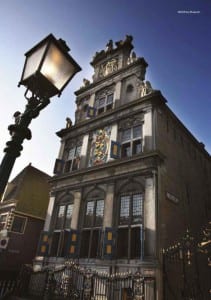 “After 25 years of service as the unofficial flagship of the State of New York, the Half Moon will have the opportunity to sail in the Netherlands,” Reynolds said.  “A new world-wide public will have the chance to appreciate the ship, which will be the only operating 17th century Dutch ship in the Netherlands. The Half Moon will highlight the Dutch Golden Age and its accomplishments.”

In an e-mail message to supporters in October, Chip Reynolds said financial hardships, including annual budget shortfalls, combined with an inability to find a permanent home port in New York State were the factors that have led to the move.

Half Moon sailed into Albany in 1999 with a plan to make the city its home port. Despite the support then Governor George Pataki the plan was never realized and Reynolds said the idea was finally dropped after 9/11.

“We have pursued many options over the years, but none have come to fruition,” Reynolds said in October. “While several concepts remain as possibilities, no person or entity in New York has so far been prepared to take ownership of the Half Moon and move forward with a larger plan.”

Illustration above, an artist’s rendition of the Half Moon in the harbor a Hoorn. Photo below, the Westfries Museum.