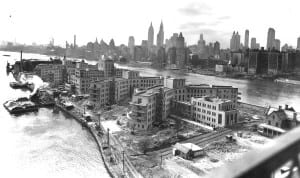 The digging, crashing, smashing and clanging will echo over the East River for a couple more years, as Cornell Tech builds a new campus on Roosevelt Island where the Goldwater Hospital stood since 1939.

The patients, many confined to wheel-chairs, have been moved to Coler Hospital at the North End of Roosevelt Island, or to the renovated old North General Hospital in Harlem (now the Henry J. Carter Specialty Hospital and Nursing Facility).

The Goldwater Hospital was a monument to the golden years of public health in New York City, designed in distinctive chevrons to offer light and air to all its patients. The rooms had terraces to allow patients direct access to fresh air, and each ward featured a solarium. The hospital had 2,700 windows. 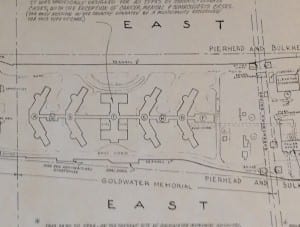 Architect Charles Giraudet spent several weeks documenting the facility before its demolition in early 2014, and created an archive of over 15,000 photographs. Works Progress Administration / Federal Arts Project murals decorated common areas, featuring unusual abstract subjects and designs from Ilya Bolotowsky, Albert Swinden, Theodore Haupt and Joseph Rugolo. The Bolotowsky mural was restored, partially by the artist himself in 1981 before he died, with work overseen by his son finished later.

The public health thinking underlying the Goldwater Hospital reflected a shift from the emphasis on epidemics and infant mortality to chronic disease and care of the aged as life spans increased. Dr. Sigismund Schulz Goldwater, health commissioner under Mayor Fiorello LaGuardia, had a vision for serving emerging needs and training young doctors in research. The founding staff saw an opportunity for longitudinal research, based on its chronic long-term patients. Both New York University and Columbia ran research units there. There was also secret War Department research on malaria and human tolerance for heat and cold, as well as minimum food (starvation) studies. These studies used conscientious objectors and volunteers. Anne Yoder, an archivist for the Swarthmore College Peace Collection has written about this work in  “Human Guinea Pigs in CPS Detached Service, 1943-1946“. 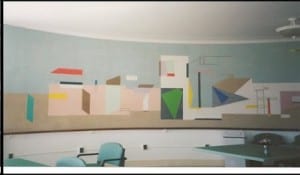 In its early years Goldwater cared for polio patients and ran a wheelchair repair shop with a national reputation for innovation and patient service. Mike Acevedo, nicknamed Dr. Wheelchair, ran it as a “wheel chair pit-stop that maintained and repaired a stock of more than 2,000 wheelchairs.” In his early work during the Vietnam era, they would scavenge parts from model airplanes to use as controls.

The island was a pioneer in creating barrier free environments with curb cuts, elevators, wide doors, and low counters, according to Judith Berdy, president of the Roosevelt Island Historical Society, which has extensively documented this history, and has a rich archive on the hospital, its leading doctors and some of its patients. She says that the hospital and associated research institutes have hosted many outstanding research scientists and doctors, including hospital director Dr. David Seegal who made advances in nephritis and rheumatic fever, and Julius Axlerod who won a Nobel Prize in Medicine for neuro-pharmalogical research relating to pain relief. Important studies of tuberculosis, arthritis and cirrhosis were also conducted there. 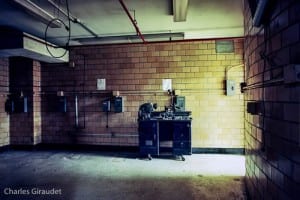 There was a nursing school and residence on the island. The Central Nurses Residence had 600 rooms, built by the Works Progress Administration. New York City ran the School of Practical Nursing from 1948-to 1970. One of the most famous nurses is best known outside of her work with patients. Jazz singer Alberta Hunter worked at Goldwater for 20 years, but is most known for her blues recordings of the teens to 1940s. Concealing her age, she studied for a nursing degree, and upon retirement started singing again until she died at age 89.

Long-term patients developed strong relationships with staff and the nursing facility operated as a home community. Patients created art in the art studio and published writing from their literary workshops. Yvonne South, a self-taught painter who was a double amputee, did two paintings that hung in the visitor center.

The powerful public health messages of the Goldwater facility were embedded in the building and campus, surrounded by its healing vistas of the East River and Manhattan skylines. The dispersal of the Goldwater community to Harlem and to Coler signals more than the re-purposing of a city hospital. It reflects a radical shift away from investing in people and public health, in favor of the cyborg, a technology campus that can spit out electronic innovations that bypass human bodies entirely, unless they are eager young PhD working on synthetic organisms. Technology has accomplished amazing things in the medical field, but the Goldwater Hospital story is a reminder that people – flesh, blood and bodies – are a necessary part of the field too.