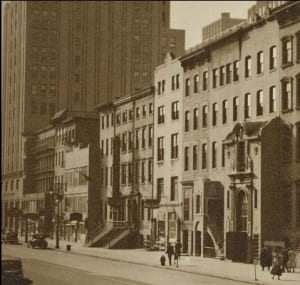 Little Spain sits just above the West Village, mostly along West 14th Street, but the casual non-Spanish pedestrian would hardly know they were in a Spanish ethnic enclave. If this stroller were a vexillologist (or a fan of the Real Madrid Soccer team) she would no doubt know that the flag hanging in front of the nondescript brownstone at 239 West 14th Street, home of the Spanish Benevolent Society, was that of Spain.

The Spanish language signs in businesses along West 14th Street are not unusual, given that the City is home to hundreds of thousands of Puerto Ricans, Dominicans, Cubans and other Spanish speakers from the Americas. However, as far New Yorkers are concerned, European Spaniards are an unheard ethnic group in the city. In comparison to other white ethnic groups that immigrated here, they are less than a drop in the proverbial bucket; perhaps 30,000 at most during the peak of late 19th and early 20th century immigration.

Nonetheless, Spain and its people who immigrated here have had an outsized but little appreciated impact on the United States.  Only a few sparse histories treat the Spanish exploration and settlement of the United States with the seriousness they deserve. The majority of U.S. history books are dismissive, uninformed, and even hostile about the Iberian presence in the United States. According to their authors, the fabled Spanish thirst for gold far exceeded that of the Anglo-Americans who poured into California, other western states, and Alaska in search of this precious metal. 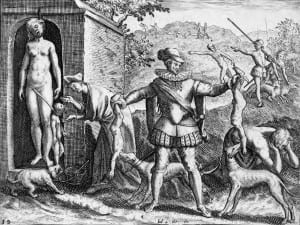 The Spaniards are also seen as the worst when it comes to the treatment of the American Indians but, with the exception of historian Jill Lapore who documented the horrific near annihilation of those living in New England by the English, scant attention is given to that virtual holocaust. In most historical accounts, the Spanish are cast as being mostly unattached men who raped Indian women while the English are depicted as devoutly religious men with wives and children at their sides. Spanish ship passenger records, as well marriage and baptismal records in Spanish territories in America, say otherwise.

Additionally, the histories of the American Revolution by and large, barely mention Spain’s contribution to the independence of the US. It was far greater than that of France and the other European nations combined, even though Spain never formally allied herself with the U.S. The gold Spanish peso was the currency of America and considerable amounts of it and war materiel were funneled directly and indirectly to the American cause for independence. Spanish ports in Europe and in the Americas were made available to U.S. ships and Spanish forces under General Bernardo Gálvez defeated the British in several battles along the Gulf Coast and Mississippi Valley, closing-off the potential of British attacks on the Americans from their Western and Southern frontiers.  Finally, the three-year-long Spanish siege of Gibraltar (24 June 1779 – 7 February 1783), though not successful, forced the British to divert troops and other resources that would have otherwise gone to the conflict in the U.S.

Spain was America’s faithful ally, but few American historians have availed themselves of the vast Spanish archives, preferring to steep themselves in those of England and France. Recently, a review of prisoners held by the British on prison ships in New York Harbor uncovered several dozen poorly spelled Spanish ones. The Spanish call the English defamation of their country la leyenda negra (the black legend). This calumny of the ancient hostility between the Spanish and the British was later adopted by Anglo-Americans when relations between the US and Spain soured after the American Revolution. 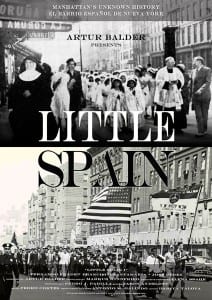 The differing views of history aside, the Spanish contribution in New York City is now being shown in a new documentary, “Little Spain.” It is a homage to the Spanish immigration to the United States, showing an unheralded part of the history of New York City.

Relatively speaking, many people know of the Spanish speaking communities of Spanish Harlem, the South Bronx, and the Lower East Side. Even more have misimpressions of Spanish-speaking neighborhoods from the musical Westside Story. Few however, know that Little Spain, densely populated by Spaniards, Puerto Ricans, and other Hispanic immigrants, formed the nucleus of a culturally rich Spanish-speaking community. Almost everyone has heard about Little Italy or Chinatown, but Little Spain’s story remains unknown.

In the film, Spanish American director and journalist Artur Balder traces the journey of those who left Spain, the Caribbean, and Spanish America in search of a better life in the United States and New York City, forming the community of Little Spain. The focal point of the documentary is 14th Street in Manhattan, the former heart of one the city’s first Hispanic communities.  Balder said he “learned a lot by sifting through the Spanish Benevolent Society’s fascinating archives and realized that what he found “was the bones of an enormous dinosaur,” and he subsequently “scraped around it” to gather more details. 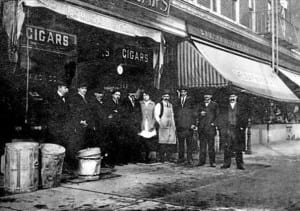 The fruit of that effort is a feature length documentary that considers the founding of La Nacional in 1868 and the immigration of Spanish, Cuban, and Puerto Rican cigar makers to New York during the Ten Year’s War in Cuba.  An uptick in migration from the Iberian nation, Cuba, and Puerto Rico also occurred following the Spanish-American War of 1898. Bernardo Vega, a Puerto Rican cigar maker who came to New York in 1917 relates in his diary that from the late 19th century through the end of World War One, there were thousands of cigar making shops in New York City and over 500 of these were owned by Spaniards and other Hispanics.  Labor leader Samuel Gompers once said that New York City, not Tampa, was “the cigar capital of the United States”. Most of these went under when machine-made cigarettes supplanted hand-rolled cigars.

Another wavelet of immigration followed in the wake of Spain’s 1936-1939 Civil War and the Franco dictatorship. Finally, there was a sharp immigration decline in the 1970s and 80s when Spain prospered under democracy. Younger Spaniards stayed home and older Spanish immigrants living in the U.S. returned to their homeland. During its heyday famous expatriate artists, writers and intellectuals, such as Picasso, Dalí, Buñuel, and Federico García Lorca could be found taking meals at the Spanish Benevolent Society’s tables. Well into the 1960s, Castilian accented Spanish was spoken on West 14th Street. 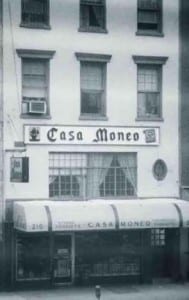 From 1929 to 1988, Casa Moneo was a leader in Spanish and Latin American gastronomy in New York City. Located at 210 West 14th Street, Casa Moneo was owned by a Spaniard from the Basque region, Carmen Barañano, widow of Jesús Moneo, as a “tienda de ultramarinos” (the overseas store) where home-sick Spaniards bought packaged foods imported from Spain. They also sold cookware, dresses, shoes and perfumes. Some movie houses in Chelsea featured “all Spanish programs”, showing films with Spanish, Mexican, and other Latin American actors.

One of the highlights of the  documentary “Little Spain” is footage of what for years was the most popular celebration in the community, the Santiago Apostol (St. James Day), which died-out in the early 1990s following an exodus of the Hispanic community from that part of the city. Today Little Spain is even littler than it once was, but a recent influx of Spaniards fleeing their disastrous economy has helped reinvigorate the Spanish Benevolent Society.

Another center of Spanish immigrant life in New York City has not fared well. This place was known as “Spanish Camp” It was a summer bungalow colony in Staten Island founded by the Spanish Naturopath Society in 1929 as a seaside summer retreat for Spanish speaking families from various New York City barrios.

Camp life included tan canvas tents on raised wooden platforms with open-air kitchens under canopies at the back; common showers, latrines and water pumps; plentiful clamming and fishing, seasonal performances by celebrated Flamenco dancers and musicians in the Salon – a lantern-strung hall.

In the late 1930s and early 1940s the tents were transformed to became small summer bungalows; later, many were winterized. It had its own streets and services, quite independent of the rest of Staten Island and New York City. The community also had small pond and wetlands, as well as a small beach on New York Harbor, and an adjacent picnic area and athletic field.

Faced with a dwindling membership and debts the Board of Directors sold the camp’s 18 acres to a developer in 2000.for $1.7 million He demolished its buildings but to date (2014) has not been able build a planned luxury condo on the spot.