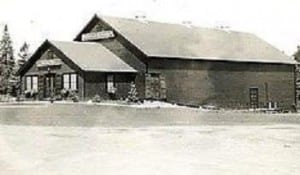 Malcolm Atterbury, who later became a well-respected character actor in Hollywood, married an Amsterdam woman and built a summer theater in the Adirondacks in the 1930s.

Kirk Douglas came up with his stage name when, as Isadore Demsky, the Amsterdam native was a stage hand and actor at Atterbury’s Tamarack Playhouse in Lakes Pleasant in 1939 and 1940.

Atterbury, known as Mac, was born in Philadelphia in 1907. He was the stepson of W.W. Atterbury, who became president of the Pennsylvania Railroad.

Mac Atterbury met Ellen Hardies of Amsterdam when both were attending the Hilda Spong Theater School in New York City. Hardies had gone to Smith College, found it boring and transferred to the acting school. She was the daughter of prominent Amsterdam district attorney and judge Charles Hardies. Her brother, Charles Hardies, Jr., became Montgomery County district attorney in the 1970s.

Atterbury and Hardies married in 1937. Atterbury told an interviewer, “Ellen’s parents and some friends were going on a cruise to the West Indies. At ten o’clock in the morning we decided to get married and go with them for our honeymoon.”

Ellen had spent summers as a child at her family’s camp in Lake Pleasant. In 1937 she and Mac vacationed there and decided to build a summer theater, which opened in 1938. The theater was west of Lake Pleasant on the Piseco Road.

The next summer the Atterburys created the Tamarack Club, which offered dining and dancing, near the theater. Actor Karl Malden was one of the players at Tamarack then, in addition to Kirk Douglas.

Historian Jacqueline Murphy found that the Atterburys lived on McGibbon Avenue in Amsterdam in the cold weather months. In January 1941 Mac directed a production of “First Lady” by Katharine Dayton and George Kaufman for Amsterdam Little Theater.

As World War II raged on, Mac put the Tamarack Playhouse on hold and assembled a troupe of actors who performed for coastal defense forces in America. Ellen was having children: Malcolm Jr., Charles and Jill. The Atterburys reopened Tamarack Playhouse after the war.

In 1947 the Atterburys left Lake Pleasant and bought the Capitol Theater in Albany. They put on plays there from October through May each year and performed in summer stock in Brattleboro, Vermont.

In 1953 Knickerbocker News critic Robert Mack gave a rave review to Ellen and Mac for their 71st and last show, “Joan of Lorraine” by Maxwell Anderson. Ellen played Joan of Arc

That year the Atterburys moved to Beverly Hills, California and both began appearing on television and in the movies. In 1954 Kirk Douglas was surprised to find Atterbury playing a ranch hand as Douglas starred in the film “Man Without a Star.”

Ellen Atterbury, who performed as Ellen Hardies, was in the 1959 movie “High School Big Shot,” the 1965 movie “Joy in the Morning” and the television series “Wagon Train” in 1957. Both she and her husband acted in theaters on the West Coast.

Mac Atterbury appeared in 75 films and 300 television episodes. He is remembered for a small role in Alfred Hitchcock’s “North by Northwest.” Atterbury plays a weathered farmer who tells Cary Grant, “That plane’s dusting crops where there ain’t no crops.” The crop-dusting plane then mounts an assault on the Cary Grant character.

In television Atterbury performed in five Perry Mason episodes, playing the murderer in three of them. He guest-starred on “Gunsmoke,” “The Twilight Zone” and “The Odd Couple.”

Photo of the Tamarack Playhouse from an old postcard.