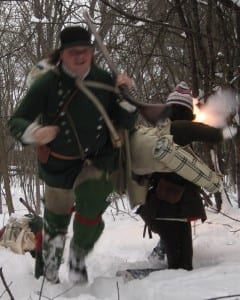 Programs take place on Sunday afternoons at 2 pm in the Mars Education Center. The cost for each program is $10 per person and will be collected at the door; free for Members of Fort Ticonderoga.

January 11, “Clothing Rogers’ Rangers” – The infamous Rogers’ Rangers played an important role in the French & Indian War history of Fort Ticonderoga. Despite the numerous accounts of them spying on the French encampments and their attacks on wood-cutting parties, their clothing and appearance is something of a mystery. Artificer Tailor Gibb Zea will discuss and translate the documentation known about the rangers to give a better idea of what they wore, how they wore it, and what textiles one might expect to find on a ranger in the 1750s. A focus on the clothing will revolve around the appearance of Rogers and his men as they would have appeared to the large French scouting party that they met on March 13, 1758, the day of the Battle on Snowshoes.

February 8, “Beyond Founding Fashion”- Fort Ticonderoga has the largest collection of 18th-century military uniforms in North America. Spend an afternoon with Director of Exhibitions Matthew Keagle for a special guided tour of the remarkable uniforms in the Founding Fashion exhibit. Following that we will see some of the uniforms not currently on display that show how military fashion evolved in the decades after the American Revolution.

March 15, “Horsepower at Ticonderoga”- In this land of strategic waterways, look at the role of horses in the military campaigns against this strategic crossroads. Join Director of Interpretation Stuart Lilie to piece together the evidence for the lives and labors of horses on the grounds of Ticonderoga.

April 19, “A Layered Legacy”- Discover the continuing story of Ticonderoga, after the guns had ceased firing; see the flowering of agriculture, tourism, and hospitality as told through the King’s Garden. Join Assistant Director of Interpretation, Cameron Green, to get a sneak peak of all the new ground being broken for the 2015 season, as well as some of the great structures and stories recently uncovered.

The “Fort Fever Series” is just one of several programs taking place at Fort Ticonderoga this winter. Clothing and Accoutrement Workshops are offered one weekend a month January-April. Fort Ticonderoga presents Living History events on January 17th, and February 21st. The Fourth Annual Garden & Landscape Symposium will be held on April 18th.

You can learn more about all of these programs by visiting www.fortticonderoga.org and selecting the “Explore and Learn” tab and click on “Life Long Learning.” Some programs require advance registration.