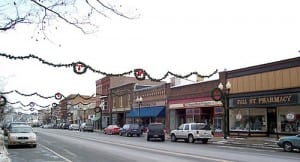 What makes up Main Street, USA and where did the idea come from?  The United States experienced an unprecedented building boom between 1870 and 1915.  As people moved out of the hot and noisy cities, seeking a more peaceful existence in the countryside, construction for new housing and shops was needed for a burgeoning population.

On Thursday, November 20th, Women’s Rights National Historical Park and Hobart and William Smith Colleges will co-host Kirin J. Makkir, Assistant Professor of Architecture who will offer a lecture titled, “Demystifying the Bricks and Mortar of Main Street;  An Early Story of Prefabrication.”  The program will be offered from 5:00 pm to 6:00 pm in the park visitor center at 136 Fall Street, Seneca Falls, NY.

After the program, the public is invited to explore the park’s fascinating new exhibit titled, “World War II Homefront.” WWII ignited over the aggressive military expansion efforts of Japan, Germany, and Italy and grew to be the most geographically wide spread military conflict the world has ever known. Though many U.S. men and women were fighting overseas during the war, an even greater number remained at home making vital contributions to the war effort. Come learn more about the context the movie “It’s a Wonderful Life” was set in as we head into the holiday season.

For more information, please visit our website at www.nps.gov/wori or call (315) 568-0024. All sites within Women’s Rights National Historical Park are free and open to the public. Follow the park’s social media sites for Facebook (http://www.facebook.com/womensrightsnps) and Twitter (http://twitter.com/#!/WomensRightsNPS) to learn more about our upcoming programs.