Since 2013 the Rockefeller Foundation has been celebrating its 100th Anniversary with a focus on resilience, a theme devised to match its mission of global engagement with big problems. Judith Rodin, the president of Rockefeller Foundation has even found time to write a whole book, The Resilience Dividend: Being Strong in a World Where Things Go Wrong. Mayor de Blasio has an Office of Resilience and Recovery run by Daniel Zarrilli, and New York has won a place in the 100 Resilient Cities Project which is trying to build stronger urban systems to resist catastrophes before they happen. But the waters are rising, and New York has been drenched again and again. Can human actions defy the cycle of damage and the predictions of future devastation proclaimed with every conference on climate change and disaster’s aftermath?

For years the Regional Plan Association has studied ways to deal with flood zones. As a center of urban planning, the RPA has always offered the wisdom of engineers which these days is more often married to thinking about how to make social systems work with the hard stuff. But as Michael Berkowitz, head of 100 Resilient Cities observes often governments know more or less what to do, but they cannot get it done. The resilience approach is looking to change the history of inaction and repeated predictable disasters by connecting economic and human systems with planning tools, environmental sensibilities and social entrepreneurship. The frameworks behind Rodin’s book address how to use the concept of “resilience” to overcome human history of both disaster and inaction. Rodin discusses interesting international case studies about how places that experience disasters do – or sometimes do not – use the shock of a catastrophe to do things differently in the aftermath. She traces how that awareness can open minds to draw on diverse resources, integrate different kinds of systems sharing information, build in self-regulation, and plan for flexibility and adaptability. 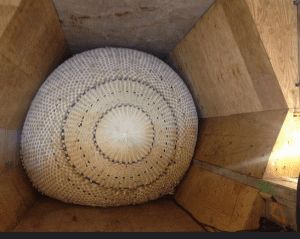 A multi-year conference at Pace University on October 20th called the Summit on Resilience II focused on public-private partnerships, bringing out one form of diversity that Rodin mentions as a source of strength. Speakers at the conference pointed out how overlapping resources from both the public and private sector were used to respond to Superstorm Sandy and to cope with the immediate emergency and the rebuild. Patrick Foye, executive director of the Port Authority, talked about real estate values, and tax incentives that influence where building takes place and how transportation projects are planned. He noted that Sandy was the worst public transportation disaster in the nation’s history, and that business suffered huge losses, as people were unable to go to work, move about, deliver goods, or shop. The MTA has billions in the pipeline for Fix and Fortify, including such new types of quick temporary measures as giant inflatable tunnel plugs. It recently issued a $125 million catastrophe insurance bond to spread risk that would only pay in certain conditions, for example, if a surge over 8.5 feet washed over Wall Street. 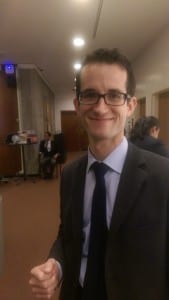 Stephane Hellegate, an economist with the Climate Change Group of the World Bank talked about how public policy is the largest obstacle to risk management and adaptation. He said that usually we know what to do, but it is not implemented, using the example of floods in Mumbai and repeated devastation in New Orleans. His analysis showed how there is a cost-benefit imbalance that paralyzes politicians. The cost of preparing for disaster is immediate, visible and concentrated, whereas the benefit is invisible, diffuse and in the future. He suggested rethinking incentives such as getting poor out of flood zone by improving transportation to inland areas. This example taken from Mumbai would help lessen the impact of predictable storm damage by lowering the number of people on coasts which is where country people migrate to live take advantage of city benefits like schools and health care. He emphasized changing the framing narrative from mopping up afterwards to preventing predictable loss.

Michael Berkowitz spoke at the Pace Conference on how 100 Resilient Cities aims to help decision makers act, so they can choose development paths that build in survival capacity and not just bounce back from acute shocks. The project has funded 32 cities as pilot projects for this work funded by Rockefeller. Their approaches include the use of “living with water” rather than simply trying to wall it out, building redundant systems and trying to encourage engaged and prepared populations that can cope with disaster. They emphasize that solutions are not all marketplace ones, but nor are they solely government iniatives. 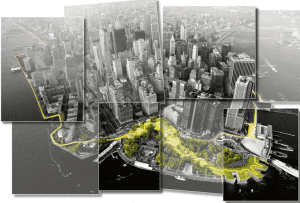 At the October 23 Municipal Art Society annual Summit, some of these types of hybrid responses were on view, highlighting the design solution for future Sandies, a combination of soft and hard responses to rising waters. The Rebuild by Design competition was won by a flexible design called the Big U by architects grouped in the Big Team. It is a wall and not a wall, a set of designs by neighborhood, built in pieces that offer solutions to the eight miles of edge that need help in the face of rising seas around Lower Manhattan. Part of the project is an urban landscape of berms, which are planted park and double as paths to protect some of the downtown area of Manhattan with a useful, absorbent kind of infrastructure. Others pieces are stepped walls that allow access to the waterfront, yet other parts let waters in to circulate, be stored and flow out again. 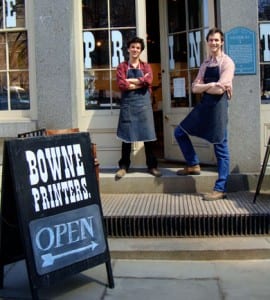 The plans offered are pie in the sky as yet, and the recent history of reclaiming the waterfronts with parks lined with condos with stupendous views contradicts the entire preparedness mindset. Downtown Manhattan has a previous legacy of historic brownstones, warehouses, and industrial buildings in some of the lowest lying areas. South Street Seaport Museum on Schermerhorn Row has not been able to recover from the damage it sustained in the surge, even though some of the individual historic craft shops like Bowne & Co. Stationary on Water Street has mopped, dried and re-opened. But it will be fascinating to see if the resiliency framework gains enough traction to overcome old habits and saves the waterfronts and warehouse districts from becoming new oyster beds.