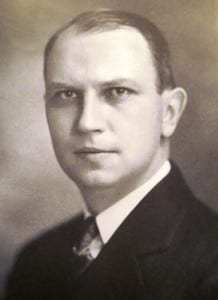 Bill Bray’s rise to power in New York State politics was an impressive feat. From a poor farm life within a few miles of the Canadian border, he worked hard at becoming a successful attorney. By the age of 39, he was chairman of the state’s Democratic Party and a close confidant of Governor Franklin Roosevelt. Bray was running the show and FDR was a happy man, reaping the benefits of Bray’s solid connections in upstate New York.

Ironically, his following across central and northern New York is what eventually drove a wedge between Bray and the governor, souring their relationship. The falling out was over patronage, a common political practice. Roosevelt balked at Bray’s request to replace the Conservation Commissioner (a Republican) with a deserving upstate Democrat. It was, after all, the payoff for supporting FDR and helping win the election. A month or so later, Roosevelt finally acceded to Bray’s wishes, but the conflict hurt Bill’s standing within the inner circle.

A chill developed between the two, and it became evident that the governor wanted Bray relieved of the party chairmanship. Roosevelt realized he needed to mend fences before any such attempt. At a party event, he began a speech with these words: “This dinner tonight is an expression of loyalty and devotion and affection to Bill Bray the man and M. William Bray, State Chairman of the Democratic Party.

It was high praise indeed from the future president, but Bray was wily enough to recognize what would soon follow—and it wasn’t long in coming. Prior to the 1930 state elections, a bitter power struggle developed between the Farley–Roosevelt team and Bray’s upstate supporters. Bray finally stepped aside, unwillingly, and was replaced by Farley as state chairman. Always a good party man and loyal to the cause, Bray still supported Roosevelt’s run for a second term. His influence won many votes upstate for the governor’s successful campaign.

In order to gain tighter control of the party after the election, Farley replaced many of the county Democratic leaders. Bray was targeted, but his popularity was widespread. Louis Howe, FDR’s closest personal advisor and a fierce combatant on his behalf, badly wanted Bray removed. But the best efforts of both Farley and Howe fell short. Even if they managed to dislodge him, it was feared the result would be an upstate rebellion in the voting booth.

Mid-level operatives tried usurping Bray’s power, but he was an adept politician, outmaneuvering them and quashing the attempts. Farley, Howe, and Roosevelt finally decided to simply dump Bray, but then backed off. The feared backlash could damage Roosevelt’s chances of a serious run for the presidency. Despite their combined influence in trying to force Bray out, he refused to cave.

That was the kind of power wielded by Bray. He remained the leader of Oneida County’s Democratic Party and was frequently mentioned as a candidate for attorney general. Recognizing subtle efforts to lure him from his Oneida power base, Bray bided his time, confident that his strength in 40 upstate counties and support from allies downstate was too strong to ignore.

Tammany leaders took notice, and when Farley and Roosevelt insisted on their man, Lehman, as the party candidate for governor, a compromise was necessary. To appease the New York City Democrats and avoid further division, Farley and his team agreed to let Tammany choose the party’s nominee for lieutenant governor.

Less than two years after being forced from the party chairmanship by Farley, Howe, and Roosevelt, Bray’s instincts to hold out proved correct—Tammany selected him as Lehman’s running mate. It was a remarkable comeback against overwhelming odds.

In November 1932, Bray’s career was further enhanced when his popularity carried him to victory. Like Lehman, he had served as state finance chairman and was now lieutenant governor. Bill seemed a sure bet for the future governorship of New York.

As the state’s new number-two man, he assumed the position of acting governor whenever Lehman was away. With the country in the throes of the Great Depression, Bray personally handled state crises in milk pricing, unemployment, and banking.

But Bray made no secret of his distaste for New Deal politics. Although he was a strong party advocate, his anti-New Deal stance made him the enemy of Roosevelt and his advisors. The trio didn’t want Bray in the governor’s seat, but faced a looming crisis. Lehman was considering not running for re-election, and Bill Bray was regarded as his default replacement.

Further complicating matters: Bray was very good at every job he held. In the face of multiple crises, he had demonstrated the ability to lead. And when further attempts to force him out proved futile, attractive job opportunities (like attorney general) were floated in his direction.

But Bill Bray was no novice to politics. When offered the nomination to New York’s Supreme Court, he politely declined, realizing they hoped to diminish his influence by placing him elsewhere. Of Irish descent, he admitted privately to being sorely tempted by another of Farley’s offers—assigning Bray as minister to the Free Irish State.

But all efforts to remove or entice him failed. Nearing Election Day, and just an hour after Farley stated publicly that Bray’s future was “up in the air,” Governor Lehman announced that M. William Bray would once again be his running mate in 1934.

Serving in the upper echelons of New York State politics didn’t keep Bray from his beloved North Country. He made many appearances, including at Malone for the Dominion Day celebration; at Wilmington, heading the first official party to drive up the new Whiteface Memorial Highway; at Plattsburgh Barracks, where he addressed the military; at Cliff Haven’s Catholic Summer School; and he occasionally vacationed at Chateaugay Lake.

As the 1936 election neared, Bray’s political epithet was rewritten again and again in the media. One Syracuse pundit said, “It’s pretty clear Bray will be dumped, but gracefully, from the ticket.” Another said Bray would be dropped as payback for not supporting certain candidates that the Farley–Roosevelt team endorsed in 1932.

Farley, one of the most powerful men in the country, pushed hard to replace him. Could Bill Bray resist against James Farley, who was the ruling authority in New York State politics, the National Chairman of the Democratic Party, the US Postmaster General, and Roosevelt’s front man? Intense heat was applied through political connections and the media. It seemed no one could withstand that much pressure, least of all a one-time farmer from Clinton.

With all the dirty work done, it was left in Lehman’s hands to assess the results and make the final decision. Incredibly, the powers that be were once again thwarted by the former farmer from Clinton. Lehman called a press conference, announcing M. William Bray as the party nominee for lieutenant governor.

The victory was sweet, but Bray was stung by the treatment he had been subjected to and resentful of the effort to drop him from the ticket. With the nomination secured, he distanced himself from the three men, refusing to support Roosevelt—or even Lehman, Bray’s own running mate!

On Election Day, New York’s voters returned Bray for a third term as lieutenant governor. Much to the chagrin of the three power brokers, the feared division within the Democratic Party seemed to be happening despite Bray’s re-election. Bill was making them pay for their actions against him by no longer urging his supporters to toe the party line.

Two years later, during the election of 1938, there was no reason for the political games of the past. Both factions knew where they stood: members of the same party, but bitterly divided. Hedging his bet, Farley said he would not support Bray’s candidacy for lieutenant governor if Bray’s opponent came out in support of Roosevelt’s New Deal.

But an overriding factor soon changed everything. Governor Lehman announced he would not seek re-nomination, virtually assuring that William Bray would become the next governor of New York. Political panic set in among Farley’s people. There was no option: Bray had to go, the results be damned.

The party was falling into disarray from constant infighting. Barely a month before Election Day 1938, Farley made a shocking announcement: Lehman had experienced a change of heart and would once again run for governor—but William Bray had been dropped from the ticket in favor of a virtual unknown, Justice Charles Poletti!

By virtue of his selection, political novice Poletti was anointed heir-apparent to the Smith–Roosevelt–Lehman New York dynasty, a position for which Bray had been time-tested and well-schooled during the past two decades.