Industrial Historian Russell Lange, former President of the Newburgh Historical Society, will deliver his popular talk titled, “Made in Newburgh”. For 150 years manufacturing drove the economy of Newburgh providing jobs for over 8,000 men and women. Open to members and the general public, this free talk will take place during their annual meeting starting at 3 pm. 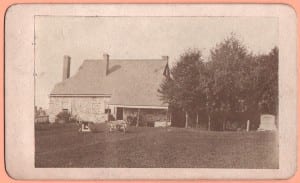 On the Fourth of July in 1850 the State of New York opened Washington’s Headquarters Newburgh. Locally, the Hasbrouck House that General George Washington took up as his headquarters during the latter part of the War for Independence was saved from possible demolition. Historically, that date marks the origin point of public preservation in the United States. Within the next two decades the nearly 3 ½ acre park the historic headquarters sat within was enlarged to 6 ½ and since, the promise to maintain this plot of land was kept. Beyond its boundaries, the rest of Newburgh continued to expand. The early 1709 settlement that once transitioned into a village was incorporated into a city in 1865. The old mills and farms that enveloped the area were replaced by manufactories, businesses, and residences. By the turn of the century industry surrounded the historic headquarters and this sliver of the past would not go unaffected.

At a time when an interest in the historical significance of the Country aligned with patriotic expression, images of Washington’s Headquarters could be seen adorning the print advertisements of some businesses. The proprietors of the Standard Oil Company of New York featured in an 1920’s advertisement the image of headquarters alongside the quote, “Here, at the close of the American Revolution, Washington issued the proclamation of peace and disbanded the old Continental Army.”

Some businesses local to the City of Newburgh also included the image of the Newburgh headquarters in official stationery as can be seen in a 1887 billhead of the Jacobs’ Baking Powder Company. 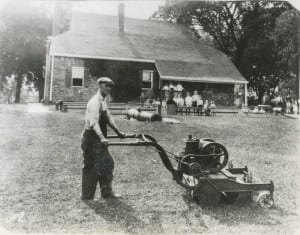 The merging of the Revolutionary War headquarters and modern industry extended beyond print advertisements. The site’s grand lawn put to the test lawn mowers manufactured in the City of Newburgh. A photograph from the 1920’s captured the building and grounds superintendent, Robert A. McMeekin, mowing the lawn with a new Coldwell lawn mower. Children and local citizens could be seen gazing upon the superintendent from the east porch of the headquarters building.

Thomas Coldwell, a Newburgh inventor, found his own success with manufacturing lawnmowers in the 1890’s after nearly 20 years in the business. Coldwell’s original factory sat just south of Washington’s Headquarters before it moved to Newburgh’s north end after a fire destroyed it in 1910. By the end of his life in 1905 Coldwell held over 20 patents in the lawn mower field. 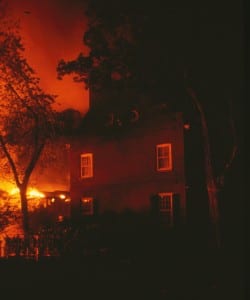 In September 1981 the collection at Washington’s Headquarters 1909 museum was threatened by a raging fire in a vacant factory directly south of the site. The museum, which opened to the public in 1910, was boasted to be fireproof and in the very early morning on September 29th this claim would be put to the test before sunrise. The old factory was once the Cleveland-Whitehill building where the company manufactured the “Newburgh Never-Rip” brand of overalls, shirts, and pantaloons.

As close as the museum was to the inferno flames, the building did not catch. However, the uncontainable heat scorched the museum’s south side damaging shutters and melting window panes. 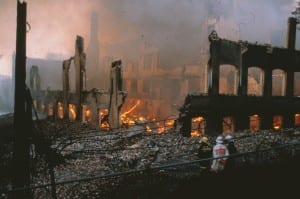 In his talk, Russell Lange will continue to illustrate the picture of an industrial Newburgh that surrounded Washington’s historic headquarters. Steam engines, lawn mowers, blue jeans, perfume, paper boxes, muslin cloth, automobiles, Christmas trees, camel hair coats and “Fabby” were all produced in Newburgh. Today most of it is gone. The talk will go into greater depth describing the rise and fall of Newburgh’s manufacturing base telling the tales of Newburgh’s inventors and entrepreneurs and their products.

Washington’s Headquarters is located at the corner of Washington and Liberty streets within the City of Newburgh’s east end historic district. Light refreshments will be provided during the 2014 Annual Meeting. For more information call (845) 562-1195.

The Friends of the State Historic Sites of the Hudson Highlands (FSHSHH) is a registered 501(c)(3) non-for-profit organization that exists in order to benefit three New York State Historic Sites – Washington’s Headquarters, New Windsor Cantonment, and Knox’s Headquarters. The supported historic sites gain from this organization’s mission to increase public awareness of the three sites’ historical and educational significance; to raise funds to be used to supplement the educational, programming and collection needs of the sites; and to offer quality education and history related items for sale to site visitors. For more information in regard to membership contact Friends.SHSHH@gmail.com.