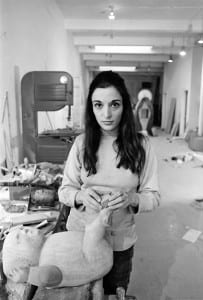 The artist Marisol Escobar sculpts figures that are big and blunt, or bright and shiny, or whimsical and eerie. She has been called a New Realist, a surrealist and a Pop artist. Born in 1930 of Venezuelan parents, her friends and companions and mentors have included Hans Hofman, Andy Warhol and Willem de Kooning.

The current exhibition at New York’s El Museo del Barrio is on view till January. Traveling from the Memphis Brooks Museum of Art in Tennessee, the exhibit features some terrific portraits, juxtaposed with works on paper that reveal a slanted take on the family. Curator Marina Pacini has selected a brilliant sample of Marisol works to reveal the streak of pain underpinning the dazzling surfaces.

The soul is wounded and the emotions warped in these pieces that often use celebrity vehicles. Marisol stages the Holy Family as a Virgin with neon halo and a womb that opens on a hinge while the Baby Jesus lies in anatomically correct comfort on a neon creche. 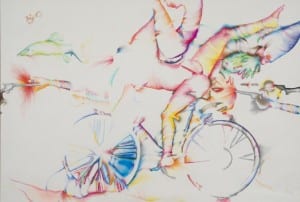 Nearby is a complicated and sinister variation on a family photograph where the original mother, father, son and daughter are cut out from the bench and surrounded by large and menacing hand that seem poised to grab, accuse or body-snatch. Body parts appear in a deceptively psychedelic work from a big show at Sidney Janis Gallery.

In “Lick the Tire of My Bicycle”, 1974, legs sprout from colorful buttocks on bicycle seat that are a target of a gun held by a hand that on is mirrored on the opposite side by a hand growing from a hairy phallus. The zippy ardor of the colored pencil striations in purple, orange and pink contrast with the dark violence of bullets, penetration and explosive, coercive sexuality. An ugly John Wayne rides a child’s pony like a carousel horse, with pistol cocked and the horn of his saddle obscenely erect. Close inspection of most of the iconic figures reveal critical details: Marisol likes to open doors to celebrity culture’s dark closet of skeletons.

In “The Funeral”, 1998, a complex tableau taken from a newspaper image of the Kennedy funeral features the over-sized wooden figure of John Kennedy Jr, in his shorts suit, mournfully salutes as the minature caisson, horses and mourners silently parade past his feet like a macabre set of toy soldiers. Marisol works with scale and contrasting figures throughout the show’s astute selections from her extensive career.

The portrait of Bishop Desmond Tutu features a warm wall of wood with a glowing lit heart, a bishop’s crook figured with African designs, and sunglasses that are a wood surface polished and varnished to a mirror state. The Picasso sculpture in blunt rough hewn wood block has more cutting details, such as the heart outlined in bent, ten-penny nails. 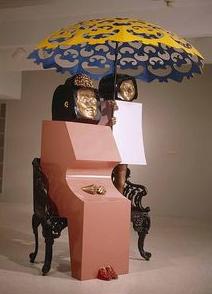 One of Marisol’s most noted works showcases many of her stylistic strengths. “Mi Mama y Yo” (My Mommy and Me, 1966 ), consists of two blunt steel blocks with cast clay feet and hands protruding, staged on a cast-iron bench beneath an enormous yellow paisley umbrella done in steel cut-outs. Distortions in scale everywhere speak to power and perceptions of the relations of mother and daughter: mama’s tiny feet neatly clad in red strapped sandals seem utterly intimidated by the pink bulk of her torso, rendered as a gigantic undulating solid. The child in bare feet stands on the bench, gripping the giant parasol as though it were a conquistador’s flag. Staring straight ahead, but visually connected at shoulder and hip of their dresses, the two figures are linked yet out of touch with each other.  The child grimaces, while the mother under her matronly hat bares her teeth in a stagy smile. Marisol’s mother committed suicide when she was fifteen — the artist never had children herself and created a body of work that traces a counter narrative to cultural cliches of the familial.

Marisol lives in Tribeca and attended events at the opening of the show in New York.