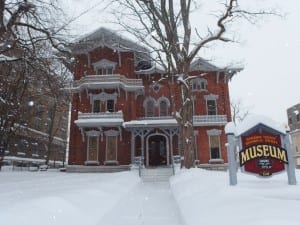 The Watertown Daily Times is reporting that the Jefferson County Historical Society (JCHS) has cancelled it’s annual Victorian Faire after holding the event for more than 20 years. JCHS Executive Director Jessica M. Phinney told the newspaper that a fall in the number of vendors from 20 to 30 in 2012, to 23 last year and just seven this year.

“We reached out to all prior vendors and the feedback was nothing bad – we are fairly priced,”  Phinney told the paper. “This year the committee decided to opt for quality. We didn’t want to put the vendors we had through (a low turnout).”

Phinney said a competing event at a local marina featuring wine, beer and food tastings may have hurt the JCHS’s event. “We’re assuming a lot of vendors are considering their event,” she said. “But that’s pure speculation. Like I said, our vendors had nothing but positive things to say about our event. It was their choice.”

Phinney was named Executive Director in 2013 after an earlier unsuccessful search to replace William G. Wood, who resigned in February 2013. Phinney has a M.A.in Anthropology from the University at Albany. Before taking the position of Executive Director she served as the Clayton, NY Antique Boat Museum’s curator of exhibits and general collections from July 2010 to October 2012, and Executive Director of the Ulster County Historical Society from June 2008 to December 2009.

Founded in 1886, the Jefferson County Historical Society, is the largest historical society in the county. It was originally located in Watertown’s Flower Memorial Library, but is now located in the 19th century Paddock Mansion at 228 Washington Street.