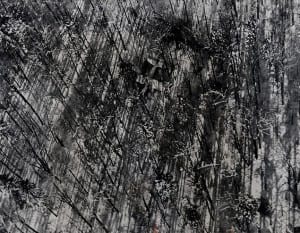 In modern times, photographs accompanying newspaper stories are sent around the world in digital format, utilizing the latest technology. But for half a century, from 1935 to 1989, the Wirephoto Service of the Associated Press was the industry standard. Prior to that time, the text of stories was sent by wire, but photographs for newsprint were shipped the same way mail and other urgent items were—by train or by plane.

Even by the speediest of methods, it could take more than three days for photographs to arrive. When a dramatic advancement—sending photographs instantly—arrived in 1935, the Adirondacks were linked forever with communications’ history.

As the Associated Press notes in its history section, “… the thought of seeing today’s picture in today’s―or even tomorrow’s newspaper―was little more than a fantasy,” even in the 1920s. But General Manager Kent Cooper believed it could be done, and he managed to overcome the technical difficulties. His vision, however, was for the same photograph to be dispersed simultaneously to multiple cities, an idea scoffed at by many in the business.

The AP forged ahead with the plan, building a network employing 10,000 miles of wire that spanned the nation, linking 39 major metropolitan newspapers in 25 cities. Links were also established by telegraph with cities in Australia, Europe, and South America.

The plan was to launch the network on January 1, 1935. Coincidentally, the media from coast to coast had been following the story of the large airplane lost somewhere in the Adirondacks. For days, readers hung on every word published on the subject. Tensions heightened when the plane was located and search teams began a desperate race against deadly weather.

The plane had crashed on the evening of Friday, December 28. In a drama that played out for three days, the men were eventually saved. Of all the events that might have occurred that day, and all the illustrations that might have been used on January 1, 1935, it was a photograph of the rescue mission that introduced a revolution in communications. 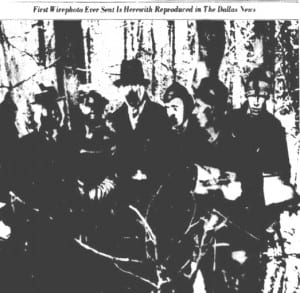 In a Texas newspaper, under the heading, “First Wirephoto Ever Sent Is Herewith Reproduced in The Dallas News,” was a photograph. With spellings corrected here, the caption read: “Rescued and rescuers in airplane disaster. This photograph was taken at Morehouseville, N.Y., just after the rescue party started back to civilization from a wrecked airliner in the Adirondacks. Left to right are R. W. Hambrook, John Partello, J. H. Brown, Dale Dryer, Lester Partello, and Floyd  Kreuzer. The Partellos and Kreuzer are rescuers. Ernest Dryer, the pilot of the wrecked plan, is not shown in the photograph.”

Story snippets described the historic event: “The readers of The Dallas News this morning are viewing on this page the reproduction of a scene in New York State, more than 1700 miles from Dallas, showing the rescue of four persons after an airplane crash in the Adirondacks.

“… The photograph was transmitted to The News by wire starting at 2 a.m., photographically developed, manufactured into a zinc engraving, and sent to press a little more than an hour after the time the picture first clicked itself over the wire.

“… The Dallas News was the first newspaper in Texas to subscribe to this service, marking an epoch in newspaper development in the US, and it has been the privilege of presenting to its readers the first picture which was transmitted over the Wirephoto system.

“The whole purpose of the service is to link pictures with news events—an account of a news event and a photograph of the same event will reach The News over parallel wires. … An 8 x 10 photo can be transmitted in eight minutes.”

To mark the occasion, Associated Press president Frank Noyes issued a statement: “The first day of 1935 witnesses a momentous event in American newspaper history, perhaps the most important development in journalism since the first news dispatch was sent over a telegraph wire in 1846.”

The Dryer saga provided a wonderful North Country footnote in communications lore, and is perhaps the greatest rescue story in Adirondack history. But there’s more. Knowing who the Dryer brothers were enhances an already amazing tale.