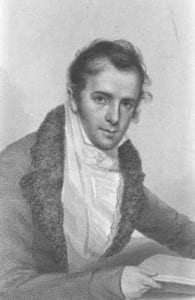 It is Washington Irving’s 1838 short story “Hans Swartz: A Marvelous Tale of Mamakating Hollow” and it is still appropriate reading this Halloween season, more than 170 years after it was penned.

You may not be at all familiar with the story, but you have likely seen excerpts from it. In fact, one passage is among those most often quoted to describe the natural beauty of Sullivan County, a paragraph recounted in Quinlan’s History of Sullivan County, published in 1873, and in Philip H. Smith’s Legends of the Shawangunk, printed in 1887, as well as a number of other works.

Quinlan does not name the work from which he quotes, writing only that in 1833 or 1834, “Washington Irving, in company with Vice President Van Buren, visited Wurtsborough. Soon after, he wrote a sketch in which he describes what he saw there in his ever facile manner.”

“The traveler who sets out in the morning from the beautiful village of Bloomingburgh, to pursue his journey westward, soon finds himself, by an easy ascent, on the summit of the Shawangunk. Before him will generally be spread an ocean of mist, enveloping and concealing from his view the deep valley and lovely village which lie almost at his feet. If he reposes here for a short time, until the vapors are attenuated and broken by the rays of the morning sun, he is astonished to see the abyss before him deepening and opening on his vision. At length, far down in the newly revealed region, the sharp white spire of a village church is seen, piercing the incumbent cloud; and, as the day advances, a village, with its ranges of bright colored houses, and animated streets, is revealed to the admiring eye. So strange is the process of its development, and so much are the houses diminished by the depth of the ravine, that the traveler can scarcely believe he is not beholding the phantoms of fairy-land, or still ranging in those wonderful regions which are unlocked to the mind’s eye by the wand of the god of dreams. But, as he descends the western declivity of the mountain, the din of real life rises to greet his ear, and he soon penetrates into the midst of the ancient settlements, of which we have before spoken.”

Smith, who throughout his writings borrowed freely from Quinlan, whom he considered the “standard authority” on Sullivan County, reprints the quote in its entirety without additional attribution.

But there is much, much more to the Irving story of Hans Swartz, which was originally published in The Knickerbocker: Or, New York Monthly Magazine in August of 1838. In setting the scene for the narrative, it begins:

“West of the Shawangunk mountain lies a sweet valley, in the days of our story called ‘Mamakating Hollow… The judicious descendants of Diedrich Knickerbocker were the first to discover and improve this rich alluvial valley, the natural entrance to which is from Esopus. Their farms, some twenty years ago, before turnpike roads and a canal intersected those regions, were stretched across the Hollow from the Shawangunk to the corresponding mountain on the west. They were thus furnished, at either extremity, with woodland and pastures; while the spacious bed between the ridges, varying from two to five miles in width, was a carpeted meadow.”

Irving eventually reveals the frightening tale of local resident Hans Swartz, a Dutchman who “had become somewhat degenerate” and a trip over the mountain on which he is escorted one dark night.

“It was near the dread hour of midnight, when horror sometimes steals over the firmest breast, that Hans seemed to be disturbed from his broken slumbers by a slight rattling at the door of the apartment. The door slowly opened, and by the dim, flittering light of the embers on the hearth, he seemed clearly to distinguish the outline of a human being on the threshold. It entered, and was followed by another and another, each more horrid than his fellow. It was in vain that Hans attempted to scream, or to spring from his recumbent posture. Terror, like a nightmare, bound him down, with its indescribable, yet agonizing helplessness. The ruffians cautiously approached the bedside. A dagger gleamed in the right hand of the foremost, and the dark outline of a pistol was seen in his left hand.”

“A Marvelous Tale of Mamakating Hollow” may not be one of Washington Irving’s best works, but it does adeptly combine elements from two of his most noted works, “Rip Van Winkle” and “The Legend of Sleepy Hollow” and also perpetuates the fun he typically had with characters of Dutch descent. Most of all from a local history standpoint, it provides an insightful glimpse into life in this area at a time from which we have little other perspective.


You can read the full story in the August 1838 edition of The Knickerbocker: Or, New York Monthly Magazine via Google Books.

Photo:  Washington Irving wrote his spooky tale set in Mamakating Hollow following a trip he made through the area with Vice President Martin Van Buren.