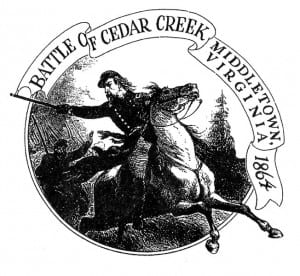 Three days before the Sesquicentennial of the Civil War Battle of Cedar Creek, Sue Greenhagen will deliver the second program in the new Madison County Civil War Series.

At 6:30 p.m. Thursday, October 16, 2014 at the Hamilton Public Library (13 Broad Street, Hamilton NY) Greenhagen will describe the October 19, 1864 battle in Middletown (Belle Grove) Virginia with particular attention to the service of the 114th Infantry Regiment which was recruited primarily from Chenango, Cortland, and Madison Counties in New York State with recruitment headquarters in Norwich NY: Companies A and H were from Oxford, Companies B and C from Norwich. Company D from Eaton, Company E from Greene, Company F from Sherburne and New Berlin, Company G from Hamilton and Brookfield, Company I from Otselic, and Company K from Cazenovia.

It was the Battle at Cedar Creek, near Strasberg VA, that stopped the last Confederate invasion of the North, and ceased the threat to Washington D.C. Union Maj. Gen Philip Sheridan took advantage of Confederate Lt. Gen. Jubal Early’s failure to continue his surprise attack on Union troops across the creek. This Union victory helped Lincoln win his reelection.

The program is free. The public is encouraged to attend and to bring artifacts pertinent to troops in the 114th and to Cedar Creek.

In recognition of the last year of the Sesquicentennial of the Civil War, Sue Greenhagen (Village of Morrisville Historian), Matthew Urtz (Madison County Historian) and Dot Willsey (23rd Annual Peterboro Civil War Weekend) initiated the Madison County Civil War Series of programs that feature New York State’s role in the Civil War with particular attention to Madison County’s connection to the War Between the States. Called “The Banner County” in the mid-1800s because of its voting support of anti-slavery measures, Madison County was a hot-bed of activities that were critical to the outbreak of the war.

Sue Greenhagen, a retired librarian from Morrisville State College, is a well-known, respected, and popular speaker around the state. Her informative and entertaining programs include PowerPoints, tours, and reenactments on Civil War subjects including military units and soldiers, cemeteries, monuments, the Loomis Gang, and genealogy. Her research and digitizing of Civil War documents are nationally respected through her website on New York State and the Civil War.

Future program planning for the Madison County Civil War Series includes “The Role of the Erie Canal in the Civil War” by Pamela Vittorio at the Chittenango Landing Canal Boat Museum at 7 p.m. Thursday, November 13; “Lincoln’s Funeral Train in NYS” in April 2015;  “Samuel Beckwith of Hamilton: Lincoln’s Telegrapher” presented by Matt Urtz in May; “Appomattox” presented by Patrick Schroeder, Historian at Appomattox Court House, Saturday, June 13th at 7 p.m. in Peterboro; and “The Loomis Gang in 1866” presented by Sue Greenhagen in 2016.