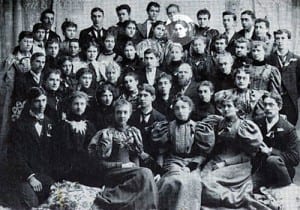 Just a few months after losing a re-election bid as county school commissioner, Ottilia Beha accepted a position in New York City, where she began teaching in 1903. By 1909, she had taught at several public schools in Brooklyn, Manhattan, and Queens, and had served as assistant principal at two facilities, gaining valuable experience.

In fall of that year, she was among 258 teachers to take the licensing exam for elementary school principal. Ottilia finished at the top of the group, leading to a promotion as principal of a Brooklyn school with 800 students and a staff of 19 employees.

Although she was far from home, there were plenty of people with whom to share her good fortune. The entire Beha family lived together in Manhattan, and an impressive bunch it was. Theresa, the family matriarch at age 58, was surrounded by a mother’s dream: Ottilia, a school principal, plus Joseph Jr., Anthony, Mary, and Rosa, all teachers in the New York City public schools. The only slacker in the bunch was James—a lawyer.

Cited by city administrators for “exceptional scholastic attainments and tried executive ability,” Ottilia served as principal of several facilities in the ensuing years, including P.S. 28, P.S. 116, and P.S. 118. At every stop along the way, she received praise from superiors, coworkers, pupils, and parents. Her drive for constant improvement led to a reputation as the best of student advocates.

Most of the Beha family returned each year to their roots in Lewis County, where Joseph Jr. had retained his home. It now served as the clan’s summer residence, playing host to Theresa, her children, and a growing number of grandchildren. Twenty years after departing the area, they still visited each year, maintaining lifelong friendships. Ottilia and Joseph, who had served as teacher and principal at Constableville, reminisced fondly with many past students.

In 1919, Beha was assigned as principal of P.S. 104, the Rutherford Junior High School in Manhattan, and was still there in late 1923 when she fell ill. Though her condition worsened in the early months of 1924, recovery was fully expected. While eagerly anticipating her return, the entire school system was stunned when Ottilia passed away on March 29. She was only 49.

Many had known of her illness, but Beha’s unexpected death generated an outpouring of anguish among her friends, family, and acquaintances. The Catholic News of New York City said, “Her uprightness of character, her unselfish devotion to duty, her gentle and unassuming manner endeared her to all who knew her. She exemplified in her life the highest ideals of womanhood. In her death, the public school system of the city has sustained an irreparable loss.”

If we’re all created equal, we certainly don’t go out that way, and in the Catholic Church, the measure of one’s relative importance can be gauged by the number of priests at a funeral. One priest, maybe two, is sufficient for most sendoffs, but at Ottilia’s final goodbye, there were 12 priests present in addition to the Mass officiants.

Also in the packed city church were a surrogate judge, a supreme court justice, three school superintendents, more than 40 principals, a great number of Ottilia’s teacher friends, and nearly 200 students from the upper grades of her school. She had touched the hearts of thousands in Lewis County, and thousands more in New York City.

As hard as it was for friends, coworkers, and pupils, the suffering was nearly unbearable for her siblings. Just 10 days after burying their beloved sister, the Behas lost their mother, Theresa, as well. The atmosphere in the family apartment would never be the same.

Two months later, the Retirement Board for New York Schools announced, “Retirement for disability was granted in the case of Ottilia M. Beha, deceased, formerly principal of P.S. 104, Manhattan.” It was either peculiar wording or an odd coincidence of timing—perhaps both. The assumption is that the declaration allowed her heirs to receive Ottilia’s retirement fund. 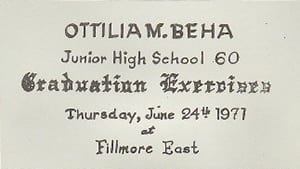 A year later, a Manhattan gathering included the president of the city board of education, the superintendent of schools, several other superintendents, a representative from the mayor’s office, and hundreds of students and teachers. The occasion was the dedication of P.S. 60, Ottilia M. Beha Junior High School. Among the features of the event were a processional, school orchestras playing, invocation, color guard, chorus, benediction, and many speeches. It was a wonderful tribute to a great lady.

Seven months after the dedication ceremony, P.S. 60 was presented with a memorial plaque to be mounted on the school building. It bore the following inscription: “In loving memory of Ottilia M. Beha, organizer and first principal of this Junior High School, who entered into Life Eternal, March 29, 1924. She was endowed with a keen intellect and unusual beauty of person. Her leadership was an inspiration, her simplicity and sweetness a potent example. Devotion to high ideals of service was the keynote of her life. Her spirit was ever a guiding light, which the shadow of death has but made more brilliant to the eyes of those who loved her.”

Yes, the special ones merit a lifetime of respect for one compelling reason: they made a difference. Lewis County should be proud.