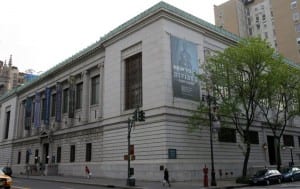 The New-York Historical Society has announced eleven fellows who will be in residence during the 2014-15 academic year. Leveraging its collections of documents, artifacts, and works of art documenting American history from the perspective of New York City, New-York Historical’s fellowships provide scholars with material resources and an intellectual community to develop new research and publications that illuminate complex issues of the past.
“The research topics that our incoming fellows will pursue — from New York’s role as a test site for loyalist and patriotic fervor during the American Revolution, to how a global network of African American culture was formed decades before the Harlem Renaissance — illuminate how important our collections are to historical inquiry in today’s world,” Valerie Paley, New-York Historical Society Historian and Vice President for Scholarly Programs, said in a statement announcing the fellows.

This year’s fellows are:

National Endowment for the Humanities Fellow

James W. Cook is currently Professor, Department of History, University of Michigan. He received a BA in European History from Princeton University in 1988 and a PhD in US History from the University of California, Berkeley in 1996. Cook is the author/editor of three books as well as recent articles in the American Historical Review, the Journal of American History, and Raritan. Cook’s project explores the first waves of African American artists, writers, and activists to move through global markets, from Phillis Wheatley’s seminal book of poetry, published in London in 1773, to Paul Robeson’s battles with the US State Department during the 1950s. Central to his story is a surprising pattern: namely, that global black fame preceded domestic acceptance by more than a century. As Cook shows, such patterns of strategic mobility were foundational for modern black expressive culture, encompassing hundreds of seminal figures, across six different continents, before the Harlem Renaissance.  Cook will draw heavily on the New-York Historical Society’s collections, in particular newspapers, sheet music, engravings, lithographs, and anti-slavery pamphlets, to trace the public appearances of African Americans across a wide range of contexts. Additionally, he will refer to the library’s archive of personal documents—namely letters and diaries—to discern the reception of African American celebrities.

Zara Anishanslin is currently Assistant Professor, Department of History, City University of New York. She received a BA in History and a BA in Comparative Literature from the University of North Carolina at Chapel Hill and a PhD in the History of American Civilization from the University of Delaware in 2009. She is the author of the forthcoming book Fashioning Empire. During her residency at the New-York Historical Society, Anishanslin will complete research for her second book, Producing Revolution: The Material and Visual Culture of Making and Remembering the American Revolution. The work will analyze images and objects from 1763-91 to consider the lives of ordinary citizens and elites who participated in the Revolutionary War. Anishanslin’s work will draw on both the library and museum collections of the New-York Historical Society.

Jason Hill is a former Visiting Lecturer of Contemporary Art History at UNLV and Terra Postdoctoral Fellow in American Art in the Insitut National d’Histoire de l’Art. He received a BA in Political Science from the University of Massachusetts, Amherst in 2001; an MA in Art History from Tufts University in 2004; and a PhD in Art History from the University of Southern California in 2011. Hill will develop his dissertation, “Artist as Reporter: The PM News Picture, 1940-1948″, into a book-length manuscript that will consider Ralph Ingersoll’s PM, an experimental daily newspaper published in New York City during the 1940s. Consulting New-York Historical’s complete run of PM, Hill will study how the publication complicated visual journalism’s role as a conduit for public knowledge.

Christopher Minty is a PhD candidate at the University of Stirling, UK. He earned a BA in History from the University of Stirling in 2010, and will be completing his doctoral studies in History in early 2014. He is the co-editor of the forthcoming Letters from America, 1775-1783. Minty will develop his dissertation into a book-length manuscript, “Between the Circles of Revolution: Association, Partisanship, and the Origins of the American Revolution in New York, 1765-1775.” Surveying New-York Historical’s personal records of would-be patriots, Minty will use New York as a case study to demonstrate that local events and sociability were crucial to the formation of the Loyalist and Patriot parties during the imperial crisis. He also will be drawing upon the manuscript collections for a co-edited volume, tentatively titled Letter from America: Loyalty and Friendship in British New York, 1775-1783.

Steven Attewell received a BA in History from Columbia University in 2005 and a PhD in Policy History from the University of California, Santa Barbara in 2013. Attewell’s project, “The Tammany Tiger in an Era of Mass Unemployment,” will examine how Tammany Hall responded to the challenging problem of mass unemployment in New York City in the late nineteenth and early twentieth centuries. Attewell will study New-York Historical’s collection of Tammany Hall materials, which includes letters, pamphlets, newspaper clippings, and meeting minutes, as well as copies of Tammany Hall’s own newspaper, the Tammany Times.

Michael Hattem is a PhD candidate at Yale University. He received a BA in History from the City University of New York in 2011 and an MA and MPhil in History from Yale University in 2013 and 2014, respectively. He will be completing his doctoral studies in 2017. He is a Contributing Editor of The Junto, an academic blog on early American history and the Producer of “The JuntoCast,” a monthly podcast about early American history. He is also a Research Assistant at the Papers of Benjamin Franklin. Hattem’s project, “‘Their History as a Part of Ours’: History Culture and Historical Memory in British America, 1720-1776,” explores the ways in which competing historical memories of seventeenth-century Britain shaped the development of late colonial political culture and imperial resistance. He will be utilizing the New-York Historical Society’s manuscript collections for case studies of the conflicts over the founding of King’s College, the bishop controversy, and the imperial crisis in New York City.

Johanna Neuman is the author of Lights, Camera, War: Is Media Technology Driving International Politics? A former political reporter based in Washington, DC for The Los Angeles Times and USA Today, she was a Nieman Fellow at Harvard University and has taught narrative writing and media history at George Washington University and Georgetown University. She received a BA in Communication and Public Policy from the University of California, Berkeley and an MA in Journalism from the University of Southern California. She is currently pursuing a PhD in History at American University. Neuman will complete research for her dissertation, “Society in Suffrage,” about the motives of New York’s socialites in joining the woman’s suffrage bandwagon in the 1910s, and the impact they had on the movement’s trajectory. Neuman will draw on New-York Historical’s collections of letters, diaries, newspapers, and institutional records.

Sean Wilentz is the George Henry Davis 1886 Professor of American History at Princeton University. Among the nation’s most renowned historians, he has written and lectured extensively on the political and social history of the United States from the American Revolution to present day.  At the New-York Historical Society, Wilentz will write a history of antislavery politics in the United States from the American Revolution to the Civil War. In an effort to refute the prevailing narrative on the subject, he will examine political developments that current literature has either slighted or ignored, ultimately contending that much of what historians believe developed during the antebellum period was already in evidence in the early republic. Wilentz will rely on a number of New-York Historical Society holdings, including the papers of the New-York Manumission Society.

Andrew Roberts is the Merrill Family Visiting Professor at Cornell University. A prominent scholar of modern European history, he has written or edited twelve books and appears regularly on international radio and television. Currently he is writing a biography of Napoleon, which will be accompanied by a three-part television series on the BBC.

Harold Holzer, one of the country’s leading authorities on Abraham Lincoln and the political culture of the Civil War era, will continue his residency as a Roger Hertog Fellow through 2015. In 2013, Holzer authored The Civil War in Fifty Objects, a volume that exclusively features objects from the collections of the New-York Historical Society.

The New-York Historical Society will also offer eight fellowships during the 2015-2016 academic year. Details about applications, residency, stipends and past fellows are available by visiting http://www.nyhistory.org/library/fellowships.

Fellowship positions at the New-York Historical Society are made possible by the generous support of Bernard and Irene Schwartz, the Andrew W. Mellon Foundation, the National Endowment for the Humanities, Leah and Michael Weisberg, The Lehrman Institute, and Roger Hertog. All fellows receive research stipends while in residency; Bernard & Irene Schwartz Fellows each teach two courses at Eugene Lang College The New School for Liberal Arts during their year as resident scholars.