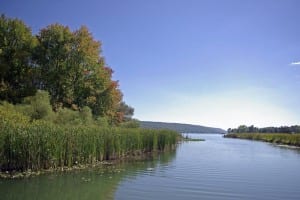 Thanks to a generous gift of land donated by sisters Anne Salisbury and Molly Sujan and to a cash contribution from their neighbors Rolf Zerges and his wife Lynda Rummel, the museum now owns the 16-acre wetland adjacent to Crescent Beach at the north end of the west branch of Keuka Lake. The parcel comes with more than 1,400 feet of water frontage on Sugar Creek, which is a navigable inlet to the lake.

The sisters donated half of their property as a gift to the museum and Zerges and Rummel purchased and donated the other half. Zerges is a museum trustee. They also funded the closing costs and title transfer fees. The legal transaction was handled by Penn Yan attorney Donald Schneider, who donated his fee for professional services to the museum as a contribution.

The parcel, which is being named The Townsend-Grady Wildlife Preserve in honor of the sisters’ father and grandmother, is deed-restricted for use as wildlife preserve and will only be used for biological studies and educational programs by the museum. A variety of bird and waterfowl species as well as mammals like beavers, foxes, and mink already inhabit the wetland and bald eagles and ospreys perch there on occasion. It is also home to the somewhat rare and prehistoric-looking soft-shelled turtle.

The Finger Lakes Museum plans to work with the New York State Department of Environmental Conservation and The Nature Conservancy to develop an interpretive boardwalk trail, wildlife observation platform, and pavilion at the site. When added to its present 13-acre campus, the acquisition gives the museum a 29-acre presence in Branchport. The two parcels are on opposite sides of Sugar Creek and NYS Route 54A.

Salisbury and Sujan said in a joint statement, “We are so thrilled that the wetlands will be in the hands of people who share our love of nature and specifically our Finger Lakes world. Our father and grandmother would be delighted with this future for their land. We look forward to walking the trail and boardwalk with our grandchildren.”

The museum’s executive director, Phil Lentini, said, “We are excited by this very generous gift of land from our own friends and neighbors and we look forward to creating educational programs that will enable us to teach and preserve at the same time.”

Word of the land transfer follows by one week an announcement that the Finger Lakes Museum is relocating its entire project to its Branchport Campus, the site of the former Branchport Elementary School. It had previously planned to build in Keuka Lake State Park.

Photo provided: Part of the 16-acre Townsend-Grady Wildlife Preserve, which includes more than 1,400 feet of frontage on Sugar Creek, can be seen on the left side in this photo. Keuka Lake lies in the distance.