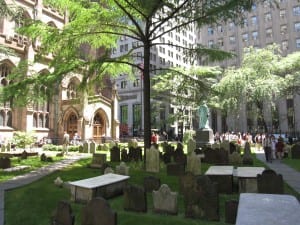 The ceremony will be preceded by a two hour walking tour beginning at 12:30 p.m. sponsored by Open House New York in which walking tour historian James S. Kaplan, will lead a group through sites of Revolutionary War importance in Lower Manhattan, ending at Trinity Churchyard.

“The purpose of this tour and ceremony is to help New Yorkers understand the importance of these very important but often forgotten Revolutionary War heroes, buried right here in Lower Manhattan,” Kaplan, who heads the Lower Manhattan Historical Society, said.

The commemoration event, which is open to the public, will take from 2:30 to 3:15 at Trinity Churchyard (79 Broadway). It is being presented by the Sons of the Revolution of the State of New York, the New York Continental Chapter of the Sons of the American Revolution, the Alexander Hamilton Awareness Society (AHA), and the Lower Manhattan Historical Society.