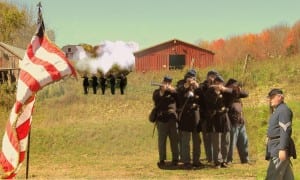 This all day event honors John Shaver, ancestor of numerous descendants live throughout the Southern Tier including Chenango, Cortland and Broome counties.

Beginning at 10 am, and throughout the day, visitors can stroll the grounds and buildings to visit the encampments of the 114th Regiment, NY Volunteers, North South Skirmish Association, and units re-enacting the Private Shaver’s own 89th NY Infantry. The Elmira Soldiers Relief Organization will talk about their activities and equipment as will members of the Daughters of Union Veterans of the Civil War and The Railroad During the Civil War.  Actors portraying President Abraham Lincoln, First Lady Mary Todd Lincoln, and General Ulysses S. Grant will be on hand, and visitors will be able to see the Coventry Town Schoolhouse Museum with period costumed tour guides.

At 12:15’s a bugle will call Private Shaver’s descendants and re-enactors to assemble behind the 114th NY flag with bagpipers to march into the Coventryville Congregational Church where the Oxford Brass Quintet will perform Civil War era music.

At 12:30 pm a Shaver’s descendants will be welcomed by Coventry Museum Director Keith Ives and  Civil War historian William Searfoss. Historian John Goodnough will describe the history of the 89th NY Infantry (Dickinson’s Guard) including the 10-month Siege of Petersburg, during which they played a key role. Civil War author and RN Phyllis Adams will outline Shaver’s injuries, available medical care on and off the battlefield, and the impact of Shaver’s injuries on his life after the war. Afton historian Charles Decker will discuss Shaver and his family’s connections to Coventry.  Museum Trustee Robin Dumais will conclude the program with a poem honoring the 10 years this event has taken place.

2:45 pm the an honor guard of First Responders, Reenactors, Veterans, active members of the military and public officials, led by bagpipers, will travel by car to the Coventry Union Cemetery, the final resting place of John Shaver. The gathering, led by Pastor Besemer, will include the playing of taps, a gun salute and the laying of a wreath on his headstone by a descendant.

Coventryville Congregational Church is at County Road 27, off State Highway 206. Questions about the event should be directed to 607- 639-4073.