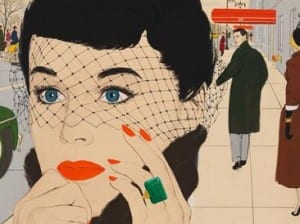 The Museum of the City of New York announces Mac Conner: A New York Life – the first exhibition of more than 70 original artworks by illustrator McCauley (“Mac”) Conner, one of New York’s original “Mad Men.” In the 1940s – 60s, Conner’s captivating advertising and editorial illustrations graced the pages of major magazines, including Cosmopolitan, Redbook, and The Saturday Evening Post, helping shape the popular image of postwar America.

The latest in an ongoing series of exhibitions that examines the lives and influence of New Yorkers, Mac Conner: A New York Life explores one man’s prolific career in New York as the world’s media capital and the country’s publishing center in the pivotal years after World War II. The exhibition will remain on view through Sunday, January 19, 2015.

“Today, Mac Conner is one of the few remaining voices of an influential group of New York illustrators who created the look of a generation,” said Susan Henshaw Jones, the Ronay Menschel Director at the City Museum. “We are thrilled to showcase his incredible work and introduce visitors to yet another remarkable New Yorker.”

“This golden era of Mac’s illustration career echoes the golden era of when New York was the hub of advertising and publishing in America.  The man had the skills and the imagination to service both with exciting images. The public will thoroughly enjoy a look at these times,” said Terrence C. Brown, a City Museum guest curator and the Director of the Society of Illustrators.

Conner considers himself an illustrator rather than an artist, and his striking graphic approach seems as modern today as it was at the height of his career. On view for the first time are reference photographs, pastel sketches, and final printed pieces that illuminate Conner’s illustration process and the nature of his collaboration with colleagues and clients, which helped to shape the final work.

Conner’s extraordinary career emerged from humble beginnings; he began to study illustration by correspondence course during the Depression. Later, he attended the Pennsylvania Museum School of Industrial Art and earned distinction as one of the youngest artists to have his work on the cover of The Saturday Evening Post, one of the most prestigious media outlets of the era. Conner eventually studied under Harvey Dunn at New York’s Grand Central School of Art, moving to the city to illustrate wartime Navy training aids and then staying on to establish his vocation.

By 1950, Conner was well established in the field and joined with William Neeley to create Neeley Associates, a studio with up to 10 artists servicing publishing and advertising clients. For the next 15 years, Conner was a mainstay illustrator for The Saturday Evening Post and for top women’s and general interest magazines, including Ladies’ Home Journal, Redbook, McCall’s, Cosmopolitan, Good Housekeeping, Woman’s Day, Woman’s Home Companion,and Collier’s. His advertising accounts included United Airlines, U.S. Army Recruiting, General Motors, and Greyhound Lines.

With dramatic perspective, bold color blocks, and eye-catching patterns, Conner’s illustrations exude an impeccable sense of style and capture ideals of female beauty, comportment, and romance that Betty Friedan later famously—and critically—labeled “The Feminine Mystique.” The themes presented in his work mirror the perspectives of the publications of the day and of their readership, with an emphasis on glamour, family values, and youth. The sophisticated, beautiful women in the illustrations are often depicted as the principal players, with men taking supporting roles.

Anxieties about postwar culture can be found in the work as well, reflecting the national scare over the “juvenile delinquent problem,” or the Cold War-era fascination with noir topics such as crime, intrigue, and mystery—subjects that Conner interpreted with dramatic compositions reminiscent of Hitchcock thrillers. Racial diversity is generally conspicuous by its absence, as the magazines usually required that all of the subjects be white, though isolated assignments expand diversity ever so slightly, as when Conner illustrated a story by Pearl Buck, or depicted a black man attending a Jewish funeral in a story for Collier’s.

By the 1960s, Conner’s style changed in accordance with changing artistic preferences cultivated by a younger cadre of illustrators who began to fill the pages of popular magazines. Women’s publications shifted their focus away from fiction, and advertising agencies began to explore the possibilities of television over print. The exhibition shows that, like many of his contemporaries, Conner reinvented himself as a paperback cover artist, creating lush paintings that depict exotic locales and historical themes for romance novels and women’s fiction published by Warner and Harlequin Books. Later in his career, Conner investigated portraiture and illustration for children’s books.

Mac Conner: A New York Lifeis curated by Terrence C. Brown, a City Museum guest curator and the Director of the Society of Illustrators, with consulting curator D.B. Dowd, Professor of Art and American Culture Studies at the Sam Fox School of Design & Visual Arts and Faculty Director of the Modern Graphic History Library, both at Washington University in St. Louis. The exhibition is co-sponsored by The Modern Graphic History Library at Washington University in St. Louis and the Rockwell Center for American Visual Studies at the Norman Rockwell Museum.

About the Museum of the City of New York

Founded in 1923 as a private, nonprofit corporation, the Museum of the City of New York celebrates and interprets the city, educating the public about its distinctive character, especially its heritage of diversity, opportunity, and perpetual transformation. The Museum connects the past, present, and future of New York City, and serves the people of the city as well as visitors from around the world through exhibitions, school and public programs, publications, and collections. Visit www.mcny.org to learn more.

Illustration: Detail from “How Do You Love Me” in Woman’s Home Companion, 1950.