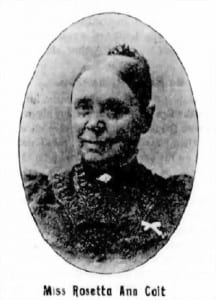 Back-to-school time perhaps brings back, for adults, the memory of a favorite teacher. But of those who are so warmly remembered, how many can elicit this wish by a former student of a 19th century teacher?

“If I could be permitted, how gladly would I again fill up the wood-box in your room and kindle the fire on your hearth…”

Those words came from the prestigious African American preacher, Rev. Daniel Webster Shaw (who, interestingly, was the son of a former slave, Harriet Shaw, with whom Solomon Northup was acquainted in Louisiana). “If I have done anything, or come to anything worth while, it is all mainly due to your timely helpfulness and godly admonition,” Shaw wrote. “I think of the school days on the Tache [Teche, a bayou in Louisiana], and all the kind ways in which you helped me to start out in life.”

The teacher, so touchingly commended by Shaw, was Rosetta Ann Coit. Coit was a daughter of James J. Coit, a native of Connecticut who had moved to Hastings in Oswego County in the 1820s. Her father worked a farm, but taught school during the winters. He also filled various official positions, including serving as an Assemblyman, and he had a role in the formation of the Republican Party.

Though her father was a devoted Presbyterian, Rosetta converted to Methodism as a child. It was her relationship with the Methodist Episcopal Church that later put her in a position that earned her the praise of Shaw and many others.

Coit grew up in a family with a strong commitment to education. Her father, James, was an advocate of the common school system, and nine of her ten brothers and sisters taught school at some point during their careers. Her sister Amelia was associated with the Porter School in Syracuse for many years.

Coit attended Falley Seminary in Fulton, and also served as an instructor there. The 1860 Federal Census shows her teaching at a Common School in Hastings. All together, she taught for 42 terms while in New York State.

Following the conclusion of the Civil War, her involvement with the church led to her taking her teaching talents to the South, where she educated African Americans in schools sponsored by the Freedmen’s Aid Society of the Methodist Church. She first served schools in Fernandina Beach and Green Cove Springs in Florida, then was briefly at a school in Alexandria, Virginia.

In the 1870s, she became an educator in Louisiana, and various officials and students praised her efforts there. She ran a school on Bayou Teche in St. Mary’s Parish, and also a school for the training of teachers in New Orleans. The latter, Union Normal School, was poorly equipped at the start, but was nursed along by Coit until it became a thriving institution that evolved into New Orleans University (today’s Dillard University).

Her perseverance in these efforts, in spite of prejudice and run-ins with the Ku Klux Klan, earned her great praise. A person connected with a black church in Baldwin, Louisiana, wrote to the Freedmen’s Aid Society, asking if they could have her come back to teach the next year. She had “efficiently looked after the spiritual and temporal interests” of the community.

An official report on Louisiana schools called her “a highly accomplished lady of sweet Christian spirit.” Another report remarked on her commitment to the “important charge of training the young and preparing them for educators to their race.”

Besides the touching remarks by Shaw, cited above, the Rev. Dr. John Wesley Edward Bowen, the prominent black preacher and theologian (and also a former student) had this to say about Coit: “I had been under the direction of a blessed woman….This Christian woman had prayed for me and exhorted me.” She “seemed to have the patience of Christ….I hope that my life will, in some way, reward her for her sacrifices.”

Even when she had chances to return to New York for visits, Coit talked to everyone she met about the need for education of the freedmen, and did what she could to garner support in the North for such endeavors.

Her southern activities concluded in 1875, when she returned to Oswego County. She was active in the Women’s Christian Temperance Union, and especially the Methodist Women’s Foreign Missionary Society for the Oswego District.

The 1880 Federal Census for Hastings shows her and her aged, twice-widowed father living together, and she cared for him in his declining years (he died in 1884). Before long, poor health visited her as well, and curtailed her activities. She moved to Pulaski to live with the family of her married sister, Caroline Morris. In the 1890s, newspapers recorded visits paid to her by several of her sisters, and noted that she was sometimes too ill to attend events related to the missionary work which she loved so well. Her passing came on May 23, 1905, following an unspecified protracted illness. Though Coit never married, she left behind many former students whose lives she had positively impacted.