Fort Nassau: the first Dutch trading house built in North America, was constructed on Castle (Westerlo) Island on the Upper Hudson where Albany is. It was but a small redoubt, yet deemed the acorn from which sprouted the American Middle States. This trading post lasted only three years and was badly damaged by a spring freshet and abandoned. Eventually even its ruins were silted over and forgotten.

In 1796, Albany contemplated a plan to acquire patents for water lots and extend South End streets opposite the north end of Castle Island, out into the Hudson River. It was similar, on a smaller scale, to the way Manhattan expanded out into the Hudson and East Rivers. In the course of finally implementing this in the 1840s, dredging was found necessary to adjust the upper end of Castle Island and Island Creek to accommodate the plan.

At some point, as an incidental result of this dredging, the north side of Fort Nassau’s moat was broken into. This in turn, apparently caused a large washout area to the west and south of the fort’s remains. This temporary re-exposure of Fort Nassau was recorded on a survey of the Upper Hudson conducted in 1861 by the U.S. Coast Survey and printed by them in 1863. 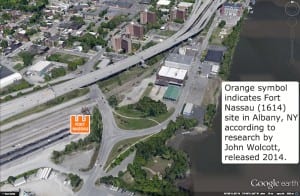 I have the good fortune of owning one of these scarce charts. By the way of some slightly painstaking intermediate measures, I transferred the fort’s quadrangle from the 1863 printed chart onto a current satellite image. The little orange square on this satellite image is about 60 foot square, which squares with the only contemporary source for the fort’s quadrangle plan. It’s in a text block on Adriaen Block’s “NIEUNEDER LANDT” chart of 1614. This reads: “Fort van Nassauen is binnen de wallen 58 voeten wydt in’t vierkant.” (“Nassau’s Fort has within its walls a 58 foot quadrangle.”) This is the little “lump” with a sort of wedge or tail below it on the detail enlargement of the 1863 chart. Close to 60 feet English (American) measure would be 58 feet Rynland Measure.

Of Doubts And Redoubts

Don Rittner, archaeologist and president of the Onrust Project, suspects two additional Fort Nassau about half a mile south of that which I have pinpointed – these would be opposite the Normans Kill which flows into Island Creek from the west. One spot of Don’s is on the west bank of Castle Island, there. The first spot seems to be indicated on Block’s Nieuneder Landt chart as referenced to above. The second is on a chart of 1616 two years later. So there could be not one but three sites, although only one is now pin pointed and should be tested A.S.A.P.

Why are we, here, met with such seeming anomalies? I can’t really say considering the paucity of contemporary written sources in this case. Strata, features and artifacts can be “read” in many a good site. Once my pinpointed site is archaeologically tested and explored and the other two suspected places searched, perhaps a nagging and persistent local legend might be affirmed or denied. This legend has it that a French Chateaux was built on Castle Island in 1540 and that Fort Nassau was constructed atop the ruins of the Chateaux.

John Wolcott is a cartographic researcher who studied anthropology under Dr. Ralph Solecki, and has been researching Albany’s built and natural environment for more than 50 years. He has identified many important sites in downtown Albany for Hartgen Archaeological Associates and has received several historic research and community awards, including “A Sense of Place” presented by Historic Albany, Cherry Hill and the Albany Visitor’s Center. In 1969 Wolcott correctly pinpointed the precise location of Fort Orange in Albany, which was uncovered then buried under an exit for I-787 the following year.