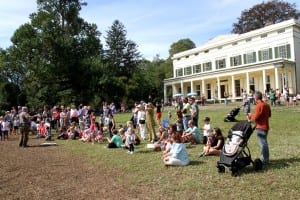 ​The Hudson Valley Ramble came to Rye on Jay Day, Sunday, September 28th. The Jay Heritage Center (JHC) has been participating in this annual event since 2009 when it was named to the Hudson River Valley National Heritage Area as a premier destination to study themes of Architecture, Landscape, and Freedom and Dignity.

About 1000 people came to the Jay Estate and soaked up the sunshine, centuries of history and the views. They sampled old fashioned honey crisp apples and homemade donuts and enjoyed traditional entertainments like apple coring and pumpkin decorating. Docents led tours of preservation projects in process including the restoration of a room that is believed to have once housed a collection of 50,000 seashells. 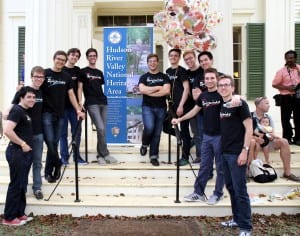 An a cappela performance by the Yale Spizzwinks on the mansion portico was a crowd pleaser as was a children’s concert on the veranda with Graham Clarke. A falconry demonstration by Brian Bradley in the Jay Meadow thrilled grandparents and grandchildren alike while also highlighting the importance of conserving our natural resources.
One of the most unique offerings was a chance for kids to meet archaeologist Eugene Boesch and handle authentic Paleo-Indian and colonial artifacts discovered at this NY Path Through History site.

The event was hosted by the JHC Preservationists and co-chaired by Elisabeth Casey and Keelin Pye.

Photos: above, Brian Bradley explains the role of raptors in the wild; and below, the Yale Spizzwinks on the Jay Mansion portico. Photos provided.