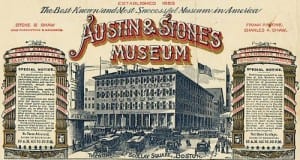 “That’ll do, pig.” It’s a line I’ve heard more than once from my wife and business partner, Jill (we’re always razzing each other about something or other). It is, of course, the famous line near the end of Babe, a movie we both enjoyed. We’re also fans of Arnold from Green Acres, and of the pigs who played leadership roles in George Orwell’s allegorical novel, Animal Farm. You can see a theme developing here―a bunch of very smart pigs who, in fantasy worlds, did all sorts of things that a reasonable person knows a pig can’t really do.

Can’t really do? Not so fast. Yes, Orwell’s pigs were the smartest animals in the barnyard. Arnold could get the mail and understand English. Babe could herd sheep as well as any sheepdog. But in the real world, the North Country once had something to rival them all. I give you Fred Kerslake’s pigs.

Our story is rooted (a truffle-related pun) in the post-Civil War years, when Thomas and Jane Kerslake emigrated from England and settled in Salem, New York, in Washington County. In early 1869, Thomas purchased the Salem Hotel, but a decade later, the family resettled a few miles east of the village in Blind Buck Hollow, where they took up farming. Thomas and Jane eventually had at least nine children. Fred (actually Seabourne Frederique) was among the four Kerslake children who were born in England. He was but a few years old when they made the journey to America.

We’ll fast-forward here briefly to note that in his future show-business life, Fred, with a twinkle in his eye, fed the media several versions of how he came to be engaged in such an unusual occupation. One of them relates to his early life on the farm, when a number of orphaned pigs were left in his care. For Fred, raising them exposed the animals’ great intelligence. His training of them culminated in a highly successful circus act.

A great story, but most likely not true, though it’s possible he did raise some pigs when he was a boy. In another version, Fred noted that small shows and traveling circuses frequently came to Salem, inspiring most children to set up makeshift circus apparatus in the family barn with hopes of one day performing.

Thus influenced, Fred became a wire-walker and lived the dream, traveling from town to town across New England. In the late 1880s, he was based in Springfield, Massachusetts, but that soon changed when the circus made a stop at Turners Falls, about ten minutes south of where the borders of Massachusetts, Vermont, and New Hampshire coincide. 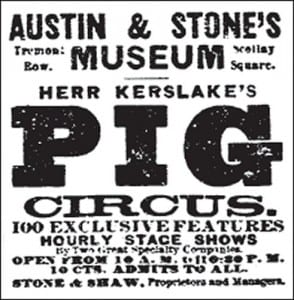 There Fred fell for Mary Jamieson, leading to great change in his life. He quit the circus, and after he and Mary wed in October 1889, they settled down on her father’s farm, where Kerslake earned his living as a farm hand.

He later began training as a mechanic. Again, we digress here to relate two more versions of how Fred came to be involved with pigs. He once told reporters that his good-natured sense of humor left him open for lots of teasing from his fellow mechanics. Several told him he would never be any good at fixing things, to which he replied, “You’re not mechanics either. Why, I could take a barnyard pig and make a better mechanic of it than you fellows will ever be.”

The next day he found two piglets, with blue ribbons attached, tied to his front door. The accompanying note said, “Make mechanics out of them.” But Fred did them one better. He trained the piglets and eventually developed a very popular circus act.

An entertaining tale, yes, but the third version of Fred’s introduction into the world of pig training was likely the truth. While living on the Jamieson farm, he and Mary attended the Barnum & Bailey circus in nearby Greenfield. There they saw a clown using a trained pig and monkey in his act, prompting Fred to comment that he could do just as well at teaching pigs to perform. Mary told him to do it, but he did nothing until she talked her father into providing three young pigs for the experiment.

Fred had worked with them for about four months when a stranger appeared, inquiring about rumors that the farm had some trained pigs. From the hayloft he observed the act, but less than halfway through, the man hurried off to catch a train, promising to be in touch soon.

The stranger―agent Samuel K. Hodgdon, as it turned out―was true to his word. Within two days, he consulted with Fred about performing in public. As breaks go, meeting this particular agent was a big one. Hodgdon would become one of the top booking managers on the vaudeville circuit for the next three decades. 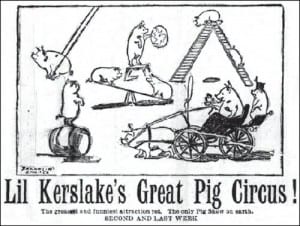 Fred’s first big appearance was at the famous Austin & Stone’s Museum in Boston, where audiences went hog-wild over each performance. After all, how could they resist the specter of pigs pushing each other in carriages, climbing ladders, and playing see-saw? Said the Boston Daily Globe, “… the most lavish compliments have been showered upon their young and unassuming trainer for the remarkable results he has achieved.”

In the following year, 1892, the plaudits continued during a tour of the Massachusetts countryside. By September, Kerslake arrived for a repeat performance at Austin & Stones, where the Boston Herald fairly gushed over Fred’s porcine protégés as they jumped hurdles, rolled barrels, and kept the SRO crowd weak from hysteric, unbelieving laughter at what they were witnessing. “Kerslake’s pig circus is undoubtedly the most remarkable exhibition of animal sagacity that has ever been seen in Boston.… The careful and patient training of Prof. Kerslake stands out boldly and wins the admiration of everyone.”