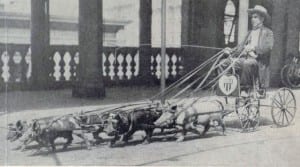 There were tough times when a lead pig died suddenly, forcing Fred Kerslake to regroup, find a new leader, and complete the necessary training. But saddest of all was when he spoke of Jennie. In 1909, Rollo was the clown pig and a great performer. Kerslake called him “a wonder that does everything but talk, and after a fashion it actually does that,” referring to Rollo’s human-like responses to his comments. Rollo rose to fame after the death of his mother, Jennie, a very special performer and friend. Said Fred, “She was certainly gifted with the divine light of human intelligence. Not only could she reason, but she could make her wants known with the aid of spelling blocks.”

While they were out on tour, Jennie was shipped ahead to the next circus location. It was a brutal story, one that Fred could never finish telling, and for good reason. Before the circus folk arrived, the cook mistook her for a food item, and when they sat down to dinner, it was unknown by all that Jenny had been butchered to feed them.

Under Ringling Brothers, Kerslake presented many old and new tricks, including pigs riding peddle-driven vehicles, skipping rope, and in a grand finale, climbing a ladder and sliding down a slide, one after another.

By this time, Fred’s training methods had evolved, as evidenced by an interview he gave in Portland, Oregon. “A pig is contrary. He finds out what you want him to do, and he goes ahead and does just the opposite, and seems to get a lot of enjoyment out of it. They cannot be forced into doing a thing, and to whip one would ruin him for training. Just patiently going over and over a thing is the only way. Pigs will stand only about ten minutes training at one time.”

Praise was heaped upon Fred for his work. Said one newspaper: “Without doubt, Lil Kerslake is the most successful trainer of domestic animals that lives…. He is indeed a wonderful man, and his big act with Ringling Brothers Circus is one of the features of the long bill.”

The work was not only praiseworthy, but lucrative as well. Around that time, one trained pig earned his keeper $450 per week (about $12,000 in 2013). With the crowds Fred and his pigs attracted, the circuses made plenty of profit. It comes as no surprise that they competed for his services. He was money in the bank.

Kerslake’s fame allowed him to travel extensively. He accompanied Orrin Brothers Circus to Mexico, and toured Europe with the Blumenfeld Circus in one of many trips across the Atlantic. Included were several command performances before heads of state. Prior to World War II, Kaiser Wilhelm was said to have hosted the act several times at his castle.

By 1913, 20-year-old Seabourne Frederick Kerslake Junior was ready to join the troupe, learning the ropes on the road. The following year, Kerslake’s pigs branched out, adding a second group of pigs under ringmaster Fred Junior. In the ensuing years, one of them toured with major circuses while the other traveled to state fairs across the South and West. They also joined vaudeville circuits in winter, always to great success. Sometimes the circuit in New York City took up the entire season.

In 1916, while Fred Senior visited more than a dozen states in the West and Midwest, Fred Junior toured Cuba for 29 weeks. It didn’t matter where they were. For such an enjoyable, quality act, there was always a market.

And Fred never forgot his roots, finding time to perform at Proudfit Hall in his old hometown of Salem, New York, and organizing many fundraisers in the vicinity of Turners Falls, Massachusetts, his adopted home. He sometimes used a pony act where the animals sat in chairs, built pyramids, and walked on two legs—but the star attraction was always Kerslake’s pigs.

In 1919, at the Southern Exposition Fair in Georgia, one of the nation’s largest gatherings, Fred’s act received high praise from fair management: “The Farmer and His Pigs, five common barnyard pigs, trained to a remarkable degree of comic efficiency by the quaint little old gentleman whose personality has made it the trained animal novelty sensation of the decade. It is a laugh, a scream, and a holler from start to finish.”

That same year, Ringling Brothers merged with Barnum & Bailey. In short order, Fred was hired as a featured act and traveled the country from coast to coast, visiting all the major cities and many smaller towns. The Vass Pilot (North Carolina) said, “Lil Kerslake, the farmer, and his trained pigs is the best comedy novelty act in America today.” 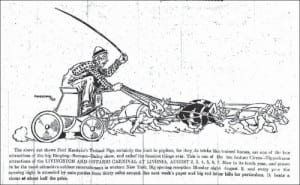 At times, Kerslake’s Pigs opened for the circus at Madison Square Garden and Coney Island. There were also stints with other circuses, like Wallace, and later Hagenback–Wallace. Fred’s wife Mary was with him all the way, tending to the animals, often joining in the fun, and sometimes handling a solo donkey act.

Fred Senior finally decided to call it quits in 1930 at the age of 64, leaving the business in the capable hands of Fred Junior, who toured for a few more years. He finally decided to settle down at home and operate the dog-kennel business that he and his father had built together.

In their retirement, Fred and Mary continued to visit circuses and fairs, keeping alive the many connections they had made over the years. They wintered in Sarasota, Florida, accumulating many new friends there and often receiving the celebrity treatment for their storied careers.

In 1939, to much acclaim in the media, the Kerslakes celebrated 50 years of marriage. Several newspapers recounted their travels and adventures during four decades in show business.

Fred passed away in 1949, just three weeks before their 60th wedding anniversary. Mary died in 1954. Fans reminisced at their passing, fondly recalling the couple dressed up as Ma and Pa Farmer, surrounded by their lovable family of performing pigs. And Fred’s amazing entrances, sometimes drawn on a cart pulled by six pigs that were harnessed like horses. And the time in Iowa, when Fred’s pigs, hitched to a wagon, won a driving competition for horses. Their competitors included the famed Schlitz Brewery team. It was amazing stuff.

But mostly they recalled laughter. Not a bad legacy, Fred. And you, too, Mary.