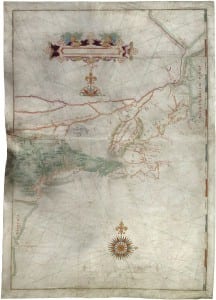 Several Wikipedia pages—”Albany“, “Castle Island,” “Fort Nassau“—claim that Albany’s first European structure was a fort on Castle Island built by French traders in 1540. The “Castle Island” page calls it a chateau and claims that the Dutch rebuilt the French fort, “which they called a castle[,] giving rise to the name of the island.” This is silly. There is no credible evidence of a French fort on Castle Island or anywhere in the region, and any account of a structure resembling a chateau is particularly absurd. So where did this myth come from?

The “Albany” page cites the Chronicles of Albany by Cuyler Reynolds. Reynolds – an early 20th-century Albany City Historian – did not cite his source, but its origin appears to be A.J. Weise’s 1884 book The Discoveries of America to the Year 1525. Weise began his argument for the French castle with a discussion of Norumbega, a mythical North American settlement that captivated New World explorers in the 16th and 17th-centuries. According to Weise, the French appellation La Terre de Normeberge is a corruption of La Terre de Anormèe Berge, a reference, he claimed, to the Palisades along the Hudson (349). Weise then turned to a 1545 manuscript in the National Library of France in which explorer Jean Alfonce described the Riviere de Norenbegue as salty to the height of forty leagues or eighty-eight miles (353). According to Weise, this “satisfactorily established” said river as the Hudson because it is brackish to a similar height. Modern scholarship, however, has largely refuted Weise’s claim.

It is now generally believed that the river often referred to as Norumbega was the Penobscot in Maine. David B. Quinn—a contemporary historian of the voyages of discovery and colonization of America—wrote that in 1542 the aforesaid Alfonce piloted a colonizing fleet to the St. Lawrence River (45). Sailing southward on his return voyage, Alfonce produced a sketch of the Penobscot River that he labeled Riviere de Norenbegue. Weise’s claim that Alfonce sailed up the Hudson is highly questionable.

Even if we accept his claim that Alfonce sailed up the Hudson as high as Albany, Weise failed to present any credible evidence of a French fort on Castle Island. He makes several specious claims to support his argument. For example, like the “Castle Island” Wikipedia page, Weise claimed that the Dutch did not build Fort Nassau. “[B]y naming it Fort Nassau,” he wrote, “[the Dutch] permitted historians to infer that they had constructed it…” (363). But it beggars the imagination to think that the Dutch went to great lengths to fool everyone by renaming the fort, then inexplicably named the island after the fort whose presence they were trying to conceal! As New Netherland Research Center Director Charles Gehring has surmised, the most likely origin of the name Castle Island is not a French chateau, but the Indian palisaded villages for which the Dutch used the word kasteel.

One final point: the castle that Weise described was substantial – fifty-eight feet wide between its walls. It is difficult to believe that such a sight would not have been noted by Robert Juet, Henry Hudson’s crewmate, as he sailed by in 1609. But his journal makes no mention of the structure.

As of this posting, I have not yet edited the Wikipedia pages describing the French fort. For any of you who may get to it first, I would suggest that, instead of deleting the references to the French fort, it would be more helpful to note their apocryphal nature and cite this page. This will allow both the myth and the truth to remain in the historical record for posterity. Thank you to Charles Gehring, Paul Huey, and Len Tantillo for a discussion that led to this post. Any mistakes are, of course, my own.