Presentations begin at 7 pm. Admission is free and open to the public, although donations are appreciated. The Fort Plain Museum is located at 389 Canal Street, Fort Plain. Check their Facebook page or website at http://fortplainmuseum.com/index.html Details can be found below. 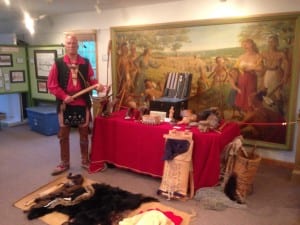 On Thursday, September 25 at 7 PM, the Fort Plain Museum will be hosting Glenn A. Bentz, Interpretative Historian, Glenn will be presenting how the Haudenosaune (Iroquois) lived in the Mohawk Valley including the American Revolution during the 18th Century. Bentz provides a wide variety of original artifacts and authentic reproductions offering his audience with visual and occasional hands on experience.

Over the years Glenn has offered his unique Program to school and senior citizen groups, museums, private functions and fundraisers and has advised and participated in movies and documentaries. Glenn can be contacted regarding his extensive knowledge as a consultant to your group or organization at injunuit@roadrunner.com or 518-673-2898. 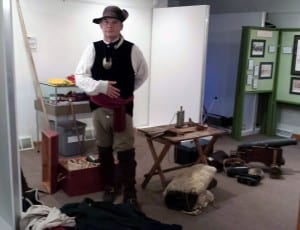 On Thursday, October 2 at 7 pm, Interpretive Historian Jeff Tew will be taking everyone on a journey back in time to meet a British Officer serving in the Mohawk Valley during the American Revolution in the 18th Century.

On Thursday, October 16 at 7 PM Interpretive Historian John Anson, who specializes in Artillery, will offer his audio-visual presentation on “Cannon Manufacturing in the 18th Century and Now.”

John Anson came to America from the UK as a Master Pattern & Model Maker with many years of experience in the automotive industry, but his second love became American History when he went to work at the New York State Museum Services; Department of Restoration and Conservation. 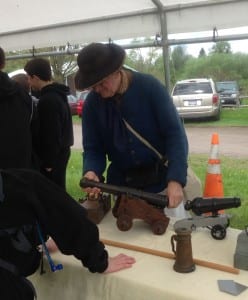 One of Anson’s many accomplishments is developing the Documentation and Patterns used by the National Park Service for Artillery to be fired and displayed during the American Bicentennial. During this period, Anson documented and fabricated the Patterns with Bill Muse, previously of the Saratoga National Historic Park for many of the Cannon’s manufactured at Lapans Foundry in Hudson Falls NY. His decades of service to many organizations including; The Company of Military Historians, the Brigade of the American Revolution, and an active Free Mason has won Anson many honors. He is retired from the State after 30 years of service and currently spends full time with his diverse collections.