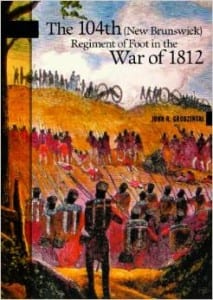 Best known for its perilous Winter March through the wilderness of New Brunswick to the battlegrounds in Upper Canada, the 104th (New Brunswick) Regiment of Foot was a British unit originally raised to defend the Maritimes, with members drawn from New Brunswick, Nova Scotia, Newfoundland, Upper and Lower Canada, and the British Isles.

In 1813, the regiment was sent to raid the American naval base in Sackets Harbor, New York, and then moved to the Niagara Peninsula to continue its fight against the invading Americans.

In 1814, the 104th also saw action along the St. Lawrence River, in the Battle of Lundy’s Lane, and at the siege of Fort Erie. By the end of the war, it was stationed in Montreal, where it was disbanded in 1817.

Largely forgotten, the story of the 104th has been resurrected by author John R. Grodzinski in The 104th (New Brunswick) Regiment of Foot in the War of 1812 (Goose Lane Editions & NBMHP, 2014) for the bicentennial of the War of 1812, using rare period correspondence, reports, diaries, and journals.

The 104th (New Brunswick) Regiment of Foot in the War of 1812 is volume 21 in the New Brunswick Military Heritage Series.